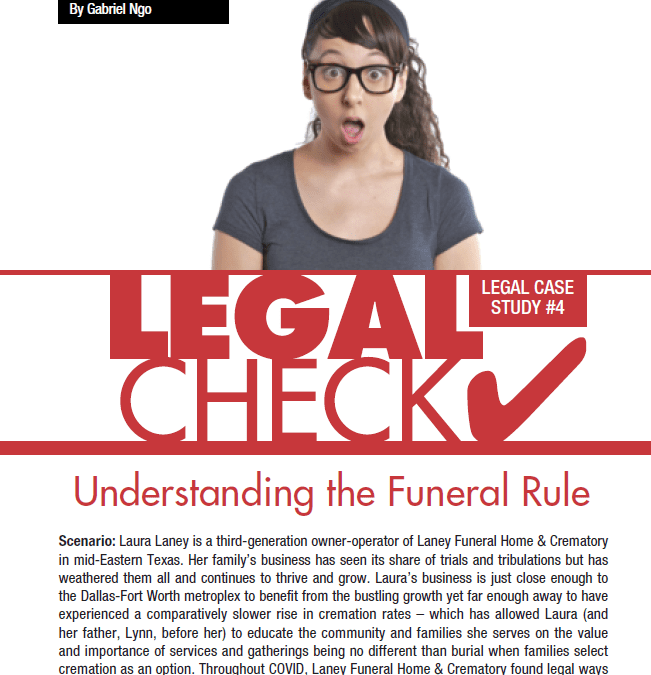 Scenario: Laura Laney is a third-generation owner-operator of Laney Funeral Home & Crematory in mid-Eastern Texas. Her family’s business has seen its share of trials and tribulations but has weathered them all and continues to thrive and grow. Laura’s business is just close enough to the Dallas-Fort Worth metroplex to benefit from the bustling growth yet far enough away to have experienced a comparatively slower rise in cremation rates – which has allowed Laura (and her father, Lynn, before her) to educate the community and families she serves on the value and importance of services and gatherings being no different than burial when families select cremation as an option. Throughout COVID, Laney Funeral Home & Crematory found legal ways around restrictions in order to provide full burial and cremation services to appreciative families as often as they could.

Over the past 10 months however, Laura and her funeral directors started noticing more frequently that families were opting to provide caskets and even urns themselves via Costco or Amazon being delivered to Laney Funeral Home. In her review of Laney’s financials through the first six months of 2022 as well as year-to-date Aug. 30, Laura was shocked to see how much lower revenue was compared to 2021’s first six months and year-to-date August 2021. She knew that calls were not likely going to be as high as 2021, but Laura had thought that revenue was going to be higher since the majority of all families served had some form of visitation and/or services included. When Laura delved deeper into her contract detail, she realized that almost 18% of all Laney calls in 2022 thus far had caskets and/or urns being brought in by a third party.

Having been an independent thinker all her life, Laura decided that she would make adjustments to adjust her pricing in order to “make back” some of this merchandise revenue that the business was losing since she had to update prices anyway, given how her supplier’s pricing increases would be taking effect in October. Laura’s plan involved the following prongs:

The very next family that Laura served was someone she knew personally. Laura and Kasey Orange had gone to school together, and Laura wanted to personally serve Kasey’s family in honoring and remembering Kasey’s uncle, Jerry Gretsch. During the arrangement conference, Kasey had told Laura that their family intended on supplying Uncle Jerry’s casket themselves. Laura tried to convey to Kasey that Laney Funeral Home’s caskets were higher quality, and that delivery and quality of merchandise were practically guaranteed for Jerry’s services.

However, Kasey still declined and re-stated that they wished to have their own casket delivered to the funeral home. Laura decided to drop the matter and did not point out the delivery surcharge for receiving third-party caskets to Kasey on the GPL. Kasey and her mother paid at the conclusion of the arrangement conference, and services for Jerry Gretsch were performed to the satisfaction of the Orange family.

However, Kasey came back to Laney Funeral Home about a week later and almost hysterically confronted Laura about the $150 delivery surcharge for receiving third-party caskets when she realized that this charge was on the funeral home’s invoice. Unfortunately, this confrontation occurred very loudly while another family was in the arrangement room.

So What Can the Funeral Home Do or Cannot Do?

As stated by the Federal Trade Commission’s (FTC) “Funeral Rule,” consumers have a right to buy a casket (or urn) from outside the funeral home, and the funeral home must treat third-party merchandise in a similar manner it treats merchandise that the funeral home buys wholesale and sells itself. The funeral home cannot charge a handling fee for accepting outside merchandise. “The Rule” is also bolstered by advisory opinions from FTC staff which include:

Therefore, the answers as they apply to Laney Funeral Home in this instance depends on the three pricing changes Laura made in the above scenario:

Regardless of whether Laura called it a delivery surcharge or any other named charge, if it is related to third-party merchandise, the FTC will interpret this as a handling charge of some sort and condemn how Laney Funeral Home did not handle Kasey’s third-party supplied casket as if it were Laney’s own wholesale casket bought from its own supplier.

While our fact pattern does not directly raise some of the other nuances that will violate the FTC Rule as it relates to third-party merchandise, Laura and Laney Funeral Home cannot also do the following:

What the Funeral Home Can Do to Resolve

Luckily for Laura based on the fact pattern, she can resolve this issue without drawing the attention from the FTC or having to retain an attorney.

The first is a practical resolution where Laura should apologize to Kasey and refund the $150 delivery surcharge to the Orange family. If Kasey’s “anger” is not quite satiated with the $150 refund and an apology, then Laura should extend a larger refunded amount or extend some other type of gift – whatever reasonable amount in order to keep this situation from becoming litigious or Kasey reporting Laney Funeral Home to the FTC.

Secondly, Laura should remove the $150 delivery surcharge for third-party merchandise from her GPL and immediately discontinue actively charging families.

She seemingly has already been able to legally work around recuperating some of the lost opportunities for merchandise sales by adjusting her Basic Service charge as well as pricing and positioning her packages requiring purchase of a casket or urn with a packaged discount of services. She does not need to list the separate delivery surcharge even though it appears as though Laura was trying to be transparent by doing so on her GPL.

Finally, Laura should take the time to become knowledgeable and truly understand how this portion of the FTC Funeral Rule affects her and her business, instead of assuming what she can or cannot do legally.