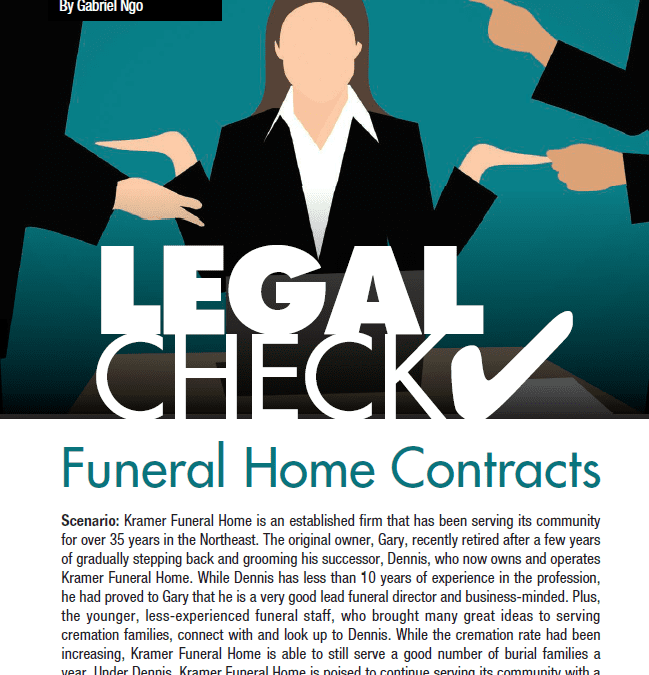 Scenario: Kramer Funeral Home is an established firm that has been serving its community for over 35 years in the Northeast. The original owner, Gary, recently retired after a few years of gradually stepping back and grooming his successor, Dennis, who now owns and operates Kramer Funeral Home. While Dennis has less than 10 years of experience in the profession, he had proved to Gary that he is a very good lead funeral director and business-minded. Plus, the younger, less-experienced funeral staff, who brought many great ideas to serving cremation families, connect with and look up to Dennis. While the cremation rate had been increasing, Kramer Funeral Home is able to still serve a good number of burial families a year. Under Dennis, Kramer Funeral Home is poised to continue serving its community with a superb reputation and excellent service.

Unfortunately, Kramer is embroiled in a cross-family dispute that could quickly become a legal dispute. A few weeks ago, John and Richie, who are siblings, came in and made funeral arrangements for their deceased mother, Claire. Gina, one of Kramer’s promising young funeral directors, met with the brothers, finalized arrangements and executed the contract for Claire’s services. Claire was ultimately going to be dressed and casketed in her favorite Sunday dress along with a specific pendant that was an heirloom to her side of the family and her favorite wedding band set that would all be provided by John and Richie. Gina wrote into her notes for the contract file folder and noted in the special instructions portion of the funeral contract that the “family would be providing dress and jewelry.”

While both brothers interacted with Gina during the arrangement conference, John was the one who signed the contract and paid for the services in full. Later that afternoon, both John and Richie came back to the funeral home bringing the Sunday dress, heirloom pendant, the wedding band set, along with pictures of Claire for her video tribute. However, Richie came back the very next morning and asked to meet with Gina. He told her that there had been a change of plans and that their mother should be dressed in another dress, necklace and ring set – all of which he had brought with him. Gina accepted the items that Richie had brought with him and complied with his request to retrieve and immediately return the items that he and John had brought in the day before.

Three days later when John arrived at the funeral home early before the visitation, followed immediately by the service and then burial, he was visibly upset but said nothing to Gina or any other funeral staff working. As the burial was concluding, John pulled Gina aside and expressed his disappointment that his mother had not been properly dressed and casketed with the agreed upon articles of clothing and jewelry, and he demanded that the funeral home return the items to him immediately. Gina tried to explain to John what had happened. However, the more she tried to explain and tell him that his brother, Richie, was the one in possession of those items originally provided, the angrier John became until he just walked away. Gina returned to Kramer Funeral Home and immediately told Dennis what had occurred. Dennis picked up the phone and attempted to call John but was unsuccessful after a few attempts. A week later, Dennis received an angry email from John expressing all of his disappointments with his brother and unsatisfactory feelings about the funeral home along with a threat of potential legal action for breach of contract.

So, What Is the Law on Contracts?

In general, principles of contract law are governed either by Common Law or the Uniform Commercial Code. Common Law governs transactions such as intangible assets, real estate, employment, services, and insurance while the UCC applies to transactions with tangible assets and goods. In this case, since we are talking about funeral services, then the Common Law applies.

A simple definition of a contract is when two or more parties enter into an agreement where an offer is made and then accepted with the intention that each party benefits from the contract. In order for there to be a valid contract, four components must be established:

As for the potential breach of contract claim, let’s first determine what this all entails. The general definition for a breach of contract is when at least one party in a valid contract does not perform his/her obligations under the terms of the contract. This may include anything from failure to deliver a good or service, not completing a job, substituting inferior or significantly different goods, not paying timely or in full, or any act that shows the party will not complete the work. Breach of contract is one of the most common causes for lawsuits. Applied to this scenario with only the facts at-hand, it appears to be debatable as to whether Kramer Funeral Home was in breach. The funeral home materially performed all the services that it typically would per the contract signed by John. The only remaining questions would be: a) whether or not Claire being dressed and casketed for visitation and funeral services in the clothing and jewelry as provided by John’s brother, Richie, instead of the clothing and jewelry initially provided by both John and Richie represented a material breach, and b) whether or not a court might potentially allow any evidence outside of the described terms established in the contract.

As applied, one could argue that Claire being dressed and casketed with clothes and jewelry provided by Richie was not material enough to prevent the funeral home from fulfilling its obligations of performing and completing visitation and funeral services for the deceased. John first realized that the clothing and jewelry for his mother was different from what he had intended when he arrived early in advance of the visitation. However, he chose to not raise the issue until after visitation, funeral and burial services had been completed. One could also argue that if this issue ever went to court, that a judge would not allow evidence outside of the described terms established within the contract and thus invoking what is known as the Four Corners Rule. This doctrine implies that the only legal parts of the contract are within the four corners of the page or document that makes up the entire contract, and if there is evidence that exists outside of these four corners, they cannot be used in court if they directly contradict the terms of the written contract. There are instances when outside evidence is permissible for supporting a written contract, and they include:

And while one could argue that the special instructions written by Gina in the funeral contract were ambiguous, merely stating that the “family would be providing dress and jewelry,” it does not controvert the fact that this issue was not material enough for John to raise the issue immediately and have the visitation and funeral services delayed. Again, you can never be certain how a court proceeding may go either in favor for or against the funeral home. However, it at least appears that John’s breach of contract threat against Kramer Funeral Home is not the strongest legal claim.

Mistakes Made by the Funeral Home

Nevertheless, there are plenty of things that Kramer Funeral Home could have done a much better job with throughout the process. The first was that Gina did not think to call or reach out to John when Richie brought alternative dress and jewelry (and it does not appear that Gina ever followed up with John about the dress and casketing at any other point in time prior to the day of visitation and service). And while her interaction with both John and Richie during the arrangement conference can cloud and confuse the picture, John is ultimately the signor and payor of the funeral contract for his mother. That is who the funeral home has obligations to. Dennis also could have done a better job after learning about the situation. Instead of relying on a phone call, he should have personally delivered the guest book to John’s house and tried to resolve the issue in-person. Overall, neither Gina nor Dennis were proactive enough in trying to stay ahead of the looming problem with a client family.

First and foremost, every employee at Kramer Funeral Home needs to understand the contract format, terms, obligations, etc. of a legal document that both families and funeral staff are signing. This also demonstrates the value and knowledge of your team when every single one of them can knowledgably explain parts of or the contract as a whole to your families. Furthermore, every staff member needs to understand and remember to whom the funeral home has an obligation to for every family, for every service. It can become confusing when multiple family members participate in funeral arrangements, but when in doubt, who signed the contract and who paid for the service? Finally, the best prevention actually has nothing to do with legal knowledge or legal terms. Because once an issue, any issue, gets to the point where there needs to be legal representation, it never, ever gets any better from that point. Therefore, anything and everything that you and your team can do to resolve an issue before it results in the threat of legal action will be worth its weight in gold and hassle later.

This article originally appeared in the June 2021 issue of American Funeral Director, published by Kates-Boylston Publications, and is being shared with permission. Visit www.americanfuneraldirector.com to subscribe.