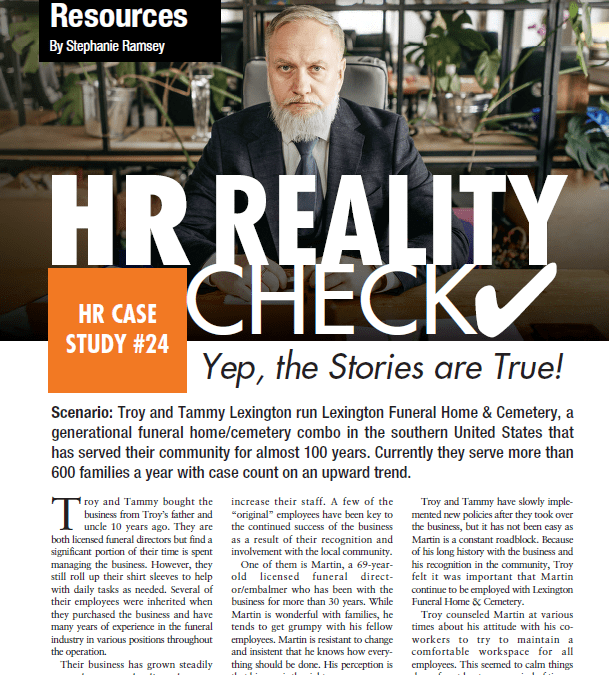 Scenario: Troy and Tammy Lexington run Lexington Funeral Home & Cemetery, a generational funeral home/cemetery combo in the southern United States that has served their community for almost 100 years. Currently they serve more than 600 families a year with case count on an upward trend.

Troy and Tammy bought the business from Troy’s father and uncle 10 years ago. They are both licensed funeral directors but find a significant portion of their time is spent managing the business. However, they still roll up their shirt sleeves to help with daily tasks as needed. Several of their employees were inherited when they purchased the business and have many years of experience in the funeral industry in various positions throughout the operation.

Their business has grown steadily over the years, leading them to increase their staff. A few of the “original” employees have been key to the continued success of the business as a result of their recognition and involvement with the local community.

One of them is Martin, a 69-year-old licensed funeral direct- or/embalmer who has been with the business for more than 30 years. While Martin is wonderful with families, he tends to get grumpy with his fellow employees. Martin is resistant to change and insistent that he knows how everything should be done. His perception is that his way is the right way.

Troy and Tammy have slowly implemented new policies after they took over the business, but it has not been easy as Martin is a constant roadblock. Because of his long history with the business and his recognition in the community, Troy felt it was important that Martin continue to be employed with Lexington Funeral Home & Cemetery.

Troy counseled Martin at various times about his attitude with his co-workers to try to maintain a comfortable workspace for all employees. This seemed to calm things down for at least some period of time.

Recently, Troy hired Amber, a qualified funeral director/embalmer who moved into the area from out of state and was able to procure a reciprocal license. Amber has 15 years of funeral industry experience.

Within the first few weeks both Troy and Tammy were quite impressed with Amber’s work ethic and her interaction with the families. About six weeks after she was hired, Amber spoke to Troy about Martin. At that time, she claimed that Martin was treating her disrespectfully. She indicated that he referred to her as “girl” and cut her off when she was trying to speak.

Troy told her he would address the issue. He spoke to Martin who denied the claims. Troy cautioned him to be respectful of his fellow employees and left it at that.

Several weeks later Amber came to Tammy crying. Through her tears she told Tammy about continued harassment she experienced from Martin and that she wasn’t certain that Troy really understood what she was experiencing as a woman in a male-dominated position.

She shared that when acting as lead funeral director with a family, Martin would change her directives and undermine her authority with the funeral assistants. He frequently would refer to her as “little girl” in the presence of the other employees, and they would all laugh at her.

Though she had been hired as a senior funeral director, Amber stated that Martin treated her as an apprentice who had no training and frequently stated in front of other employees that she was performing work incorrectly even though she was following the procedures outlined by company policy. His actions were making her work environment miserable, and she was considering giving her notice and finding another position.

Tammy assured her that they wanted to retain her as an employee and that they would address the issue with Martin more directly to improve her work environment. Tammy and Troy reached out to a professional consultant to make sure that they addressed Amber’s concerns and handled Martin appropriately.

What are the rules?

The U.S. Equal Employment Opportunity Commission prohibits harassment in the form of employment discrimination that violates Title VII of the Civil Rights Act of 1964, the Age Discrimination in Employment Act of 1967 and the American with Disabilities Act of 1990. Harassment in general is unwelcome conduct that is based on race, color, religion, sex (including sexual orientation, gender identity or pregnancy), national origin, older age (beginning at age 40) disability or genetic information. Harassment becomes unlawful where: 1) enduring the offensive conduct becomes a condition of continued employment, or 2) the conduct is severe or pervasive enough to create a work environment that a reasonable person would consider intimidating, hostile, or abusive.

What constitutes a hostile work environment?

A situation can be considered hostile when the harassing or discriminatory behavior is at a level and frequency that it interferes with an employee’s ability to perform their job; creates an aggressive, abusive, intimidating or humiliating work environment; or causes a situation where a person’s psychological well-being is adversely affected.

In this situation, it is clear that Amber perceives that she is in a hostile work environment. Assuming that Amber’s statements are truthful, it appears that Martin is violating the EEOC guidelines of sexual discrimination and harassment. It is important to note that sexual based harassment can be about gender rather than sexual in nature.

By referring to Amber as “little girl,” Martin is identifying gender as an issue to harass another co-worker.

Did the employer make any mistakes?

Although Troy did speak to Martin about respecting his co-workers, there was no investigation to determine if Martin had acted the way Amber claimed. It is incumbent upon the employer to investigate each and every report of discrimination or harassment to make sure that such situations are properly addressed.

Resolution of the issue

Troy and Tammy need to investigate (or hire a third party to do so) to determine whether or not there is, in fact, potential discrimination and/or harassment occurring within the business. Through this process, both Amber and Martin are treated fairly. From Amber’s comments there may be some witnesses who can corroborate her side of the story. If they do not, then the pendulum swings the other way.

Based upon the outcome of the investigation Troy and Tammy should then take action. If the investigation supports Amber’s claims, Martin must be written up and provided clear counseling on his violation of sexual discrimination and harassment. He must understand that such continued behavior will result in termination. Despite his value to the business, his actions are creating a significant risk to the business in terms of a potential costly lawsuit.

If the investigation comes down in Martin’s favor, a meeting conducted with both employees to try to overcome their communication difficulties would be advisable. As the employer, Troy and Tammy have a reasonable expectation that employees find a way to work together even if they do not care for each other. Establishing a neutral environment where both parties can “clear the air” may be the way to create a path forward toward a working partnership.