From Wags to Riches

To Avoid Some ‘Ruff’ Times, Follow the 4 Ps of Pet Loss We have all heard of the many inspiring rags to riches stories from Dolly Parton to Halle Berry, Ed Sheeran, Leonardo DiCaprio, Oprah Winfrey, and so many others. Of course, these are just the high-profile stories of the now rich and famous, but the world has so many others who have achieved great success from less than humble beginnings. But this is a different kind of story. This is a “Wags to Riches” story and it’s just waiting for you to finish writing the ending. However, like rags to riches, the development of a pet cremation and/or pet burial business can see some “ruff” times, especially in the early years. Therefore, to be successful, it is crucial that you follow the “4 Ps” of pet loss: Purpose, Planning, […]
Do you like it?
Read more

When Opportunity Knocks, Be Prepared

Ask the Right Questions, Get the Right Answers Most of us might be familiar with this verse from the Bible: “Ask, and it shall be given you; seek, and ye shall find; knock, and it shall be opened unto you.” Matthew 7:7 (KJV). The passage suggests that God will give whatever is needed to those who have the faith to ask for it. The same often holds true when it comes to helping cremation families. If you desire more than just a direct cremation, you must ask. The ask comes in the form of questions. You also must seek the answers you are looking for from your client. Only through exploration with conversation starters can you obtain the necessary knowledge to enlighten the family to additional offerings. Finally, you must knock if you want the door to be opened. In […]
Do you like it?
Read more

The best thing I’m doing right now is evangelizing the value of the funeral, and not just to the outside world but to those in our profession as well. Granted, evangelism is typically used in terms of spreading the Christian Gospel, but it can also mean “a zealous advocacy for a cause” or “to talk about how good you think something is.” I believe now is a great time to be in funeral service. In fact, the services we provide are needed more today than ever before. We often hear individuals in funeral service refer to their chosen profession as a calling, much like someone’s calling into the ministry. In fact, many directors say they “minister” to the families they serve. Therefore, if the work of a funeral director is a calling, then I am proud to be a “‘funeral […]
Do you like it?
Read more 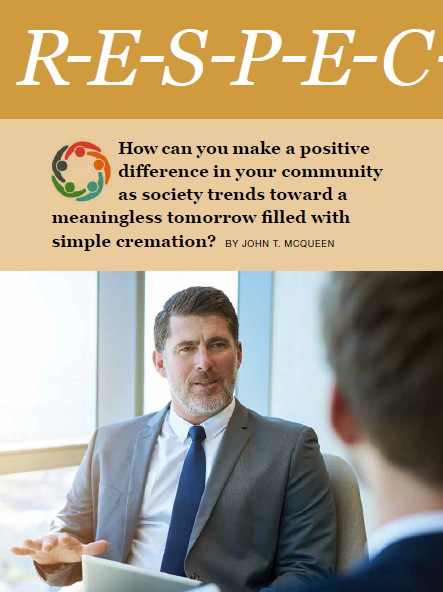 How can you make a positive difference in your community as society trends toward a meaningless tomorrow filled with simple cremation? Most scientists and archaeologists agree that Homosapiens, or modern humans, came into existence between 200,000 and 300,000 years ago. The first known communities, however, did not exist until around 14,000 years ago. But it’s the 9,500-year old Neolithic settlement known as Catalhoyuk, located in south-central Turkey, where nearly 8,000 people gathered, that may hold the key to the rise in major communities. Prior to the discovery of Catalhoyuk, humans were mostly known as nomadic people, hunters and gathers wandering in search of food. Although still up for some debate, archaeologists believe these early settlers came together through shared spirituality and artistic expression, giving way to shared farming and other social customs. There is no doubt that the Neolithic Revolution […]
Do you like it?
Read more 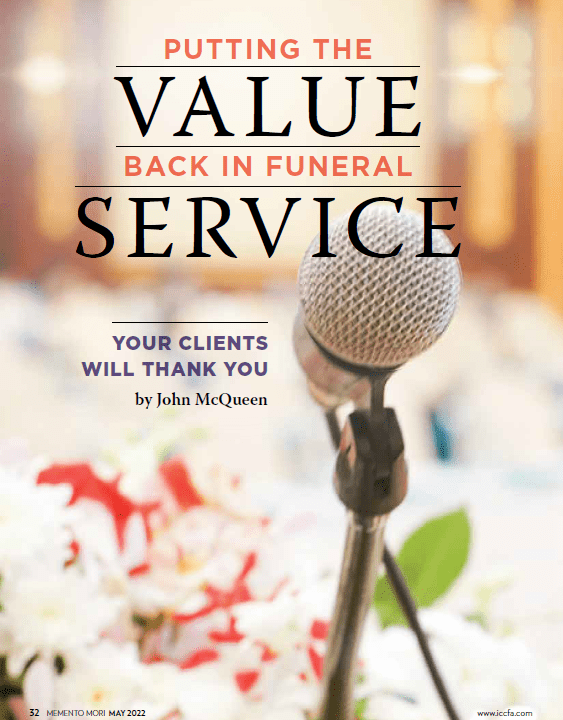 Putting the Value Back in Funeral Service

Your clients will thank you In the 1609 William Shakespeare play, hamlet, the main character is torn between life and death. His famous line, “To be or not to be, that is the question,” is most appropriate when discussing Celebration of Life ceremonies. And although the question is different, the conundrum remains the same: Do families want a celebration of life or not? I’m here to tell you that the answer is yes, but will it be held with you, the funeral professional, is the real question. As identified in The Foresight Companies’ 2021 Consumer Survey, 63% percent of consumers feel a big celebration is important in honoring the life of the deceased. In fact, this number has increased in the post-pandemic world in which we now live. On the surface, that number looks to be good news for the […]
Do you like it?
Read more
1234
Next page