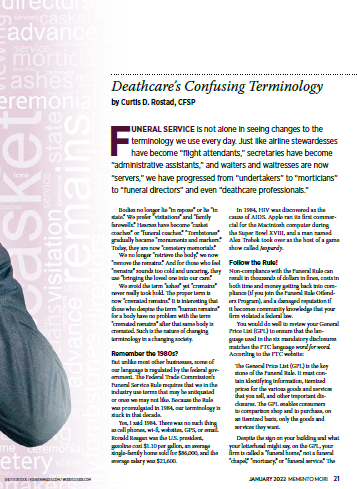 Funeral Service is not alone in seeing changes to the terminology we use every day. Just like airline stewardesses have become “flight attendants,” secretaries have become “administrative assistants,” and waiters and waitresses are now “servers,” we have progressed from “undertakers” to “morticians” to “funeral directors” and even “deathcare professionals.”

Bodies no longer lie “in repose” or lie “in state.” We prefer “visitations” and “family farewells.” Hearses have become “casket coaches” or “funeral coaches.” “Tombstones” gradually became “monuments and markers.” Today, they are now “cemetery memorials.”

We no longer “retrieve the body,” we now “remove the remains.” And for those who feel “remains” sounds too cold and uncaring, they use “bringing the loved one into our care.”

We avoid the term “ashes” yet “cremains” never really took hold. The proper term is now “cremated remains.” It is interesting that those who despise the term “human remains” for a body have no problem with the term “cremated remains” after that same body is cremated. Such is the nature of changing terminology in a changing society.

But unlike most other businesses, some of our language is regulated by the federal government. The Federal Trade Commission’s Funeral Service Rule requires that we in the industry use terms that may be antiquated or ones we may not like. Because the Rule was promulgated in 1984, our terminology is stuck in that decade.

In 1984, HIV was discovered as the cause of AIDS. Apple ran its first commercial for the Macintosh computer during the Super Bowl XVIII, and a man named Alex Trebek took over as the host of a game show called Jeopardy.

Non-compliance with the Funeral Rule can result in thousands of dollars in fines, costs in both time and money getting back into compliance (if you join the Funeral Rule Offenders Program), and a damaged reputation if it becomes community knowledge that your firm violated a federal law.

You would do well to review your General Price List (GPL) to ensure that the language used in the six mandatory disclosures matches the FTC language word for word. According to the FTC website:

The General Price List (GPL) is the key stone of the Funeral Rule. It must contain identifying information, itemized prices for the various goods and services that you sell, and other important disclosures. The GPL enables consumers to comparison shop and to purchase, on an itemized basis, only the goods and services they want.

Despite the sign on your building and what your letterhead might say, on the GPL, your firm is called a “funeral home,” not a funeral “chapel,” “mortuary,” or “funeral service.” The people you serve must be referred to as “customers,” not “clients,” or “families.”

The itemized prices for 16 services that you provide must also be listed using the exact language mandated by the Funeral Rule. For example, a “viewing,” is not a “visitation.” You “transfer the remains” to the funeral home, you don’t “remove” them or “take them into your care.” It’s a “funeral ceremony,” not just a “funeral.” It’s a “hearse,” not a “funeral coach.”

The Cost of Confusion

And maybe that last one is not a bad thing. Sometimes our language can get a little too fancy for our own good. Many years ago, I was completing the arrangements for an elderly gentleman. As I went through the prices for each service the family selected, I used the more sophisticated term, “funeral coach.” The widow stopped me and said, “We don’t need one of those.” Immediately, I wondered what weird mode of transportation she had in mind. His pickup truck? Farm or ranch machinery? “We don’t need one of those, she said, “We’re doing just fine.”

Funeral coach, life coach, football coach… get it? She thought a funeral coach was some kind of grief counselor who would “coach” them through the funeral process. And she felt the family was coping just fine. It was on that very day that I ordered our firm to “un-sophisticate” ourselves and use the same language our community used. Every person in our town (your town, too, I bet) calls the transportation a hearse; and so we did, too.

What About the ‘Rental Casket’?

Many firms offer service packages, whether they are discounted or not. Regardless, the FTC says that you must indicate which services are included in each package and that the terms you use should be the same terms the FTC requires on the rest of the GPL.

On the other hand, you can call your “rental casket” anything you like. “Ceremonial casket” seems to be quite popular, though it may not accurately convey what that means. The FTC has nothing to say about that because the concept of renting a casket for a viewing prior to cremation was unheard of in 1984.

Nor does the FTC specifically mention “pre-need.” It has since ruled that the Funeral Rule applies to all service arrangements, at-need and pre-need. But as for terminology, you are free to call it “advance planning” if you so desire. Beyond that, prices for pre-need services must be presented just like in an at-need arrangement and must utilize the FTC language.

Cut Out the Fluff

Using the FTC mandated language does have at least one benefit. Cutting down the flowery language can prevent unnecessarily lengthy GPLs. Paragraphs explaining how important funerals are, how caring your family-owned firm has been for however many decades, and how you don’t want families to spend beyond their means go generally unread and simply take up more space.

Even inserting a line about providing the price list in accordance with federal law (which will be seen as blaming the government for making this more complicated) isn’t really necessary, and skeptical consumers might see it as sarcasm—“If it weren’t for the government requiring us to do this, we would rather hide our prices from you.” A GPL that is eight to 16 pages in length cannot be consumer friendly.

In our attempt to sound professional and contemporary, sometimes, the terminology we use can be confusing to the people we serve. That is why you should watch our language!