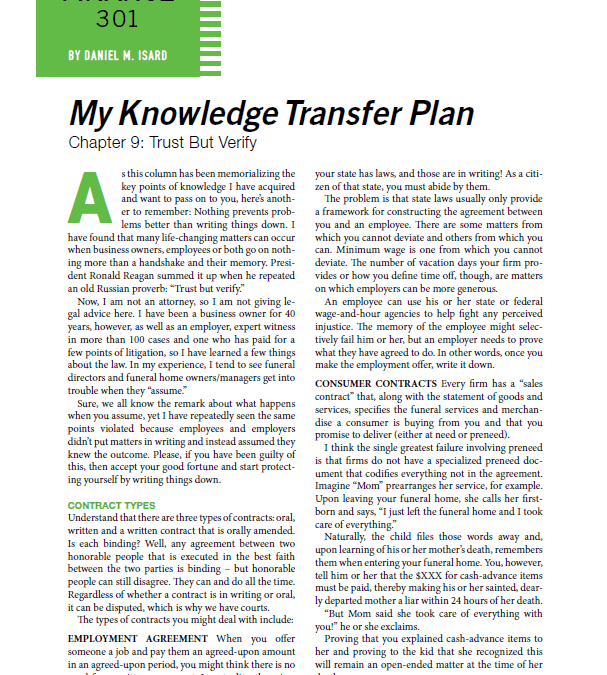 As this column has been memorializing the key points of knowledge I have acquired and want to pass on to you, here’s another to remember: Nothing prevents problems better than writing things down. I have found that many life-changing matters can occur when business owners, employees or both go on nothing more than a handshake and their memory. President Ronald Reagan summed it up when he repeated an old Russian proverb: “Trust but verify.”

Now, I am not an attorney, so I am not giving legal advice here. I have been a business owner for 40 years, however, as well as an employer, expert witness in more than 100 cases and one who has paid for a few points of litigation, so I have learned a few things about the law. In my experience, I tend to see funeral directors and funeral home owners/managers get into trouble when they “assume.”

Sure, we all know the remark about what happens when you assume, yet I have repeatedly seen the same points violated because employees and employers didn’t put matters in writing and instead assumed they knew the outcome. Please, if you have been guilty of this, then accept your good fortune and start protecting yourself by writing things down.

Understand that there are three types of contracts: oral, written and a written contract that is orally amended. Is each binding? Well, any agreement between two honorable people that is executed in the best faith between the two parties is binding – but honorable people can still disagree. They can and do all the time. Regardless of whether a contract is in writing or oral, it can be disputed, which is why we have courts.

The types of contracts you might deal with include:

An employee can use his or her state or federal wage-and-hour agencies to help fight any perceived injustice. The memory of the employee might selectively fail him or her, but an employer needs to prove what they have agreed to do. In other words, once you make the employment offer, write it down.

Every firm has a “sales contract” that, along with the statement of goods and services, specifies the funeral services and merchandise a consumer is buying from you and that you promise to deliver (either at need or preneed).

I think the single greatest failure involving preneed is that firms do not have a specialized preneed document that codifies everything not in the agreement. Imagine “Mom” prearranges her service, for example. Upon leaving your funeral home, she calls her firstborn and says, “I just left the funeral home and I took care of everything.”

“But Mom said she took care of everything with you!” he or she exclaims.

Proving that you explained cash-advance items to her and proving to the kid that she recognized this will remain an open-ended matter at the time of her death.

Similarly, the next great matter in the world of cremation will deal with the receipt of the transfer of cremated remains. I have seen families fight over this. Suddenly, funeral directors become liable because they didn’t create a written receipt showing who they turned the remains over to, when they did so, and that the recipient was authorized to claim them!

You can’t get on an airplane without proving who you are. Shouldn’t the person to whom the arranging party says you can and should turn over the cremated remains also show some modicum of identification?

Imagine you tell someone you’re hiring, “If you leave our employment, you may not go to work for our competitor.” Wanting employment, this person will likely say yes to almost anything.

After a few years, however, now thinking he or she is worth more than you think he or she is, that employee plans to jump to another firm, bringing your clientele along. Sure, he or she agreed not go to work for a competitor, but that was years ago and you don’t have anything in writing.

Most lawyers will tell you that non-compete agreements are not enforceable. They might be right, but your first line of offense should involve presenting an agreement outlining a non-compete promise in which the employee agreed to employment knowing that such employment would not be offered to him or her without agreeing to a promise not to compete. If you have a written agreement, you will have a better chance of winning your case or at least delaying the start of this former employee elsewhere.

Non-compete clauses should spell out who a competitor is and how long a person should be precluded from being employed by a competitor. In addition, the distance of non-competition should not be measured in a straight line but rather by a “marketing circle.” Imagine that the employee says, “I will not go to work for any firm within 10 miles,” but ultimately goes to work for a firm 11 miles away. Is that okay? How would you feel if that competitor markets within that 10-mile area?

Most firms do not inform their staff, in writing, of what is and what is not confidential data. Confidential data could comprise the list of preneed contracts the company has entered into, for example. I have often seen an employee or former owner leave a company and attempt to monetize his or her knowledge of who has a preneed agreement with their former employer. That person, who inevitably moves to a competitor, sends out 100 letters saying he or she now works at a new firm, and all 100 of those letters just happen to go to existing preneed contract holders. What a coincidence!

“Come work for me, Young Person, and someday I will sell you this business!” says the soon-to-be-retiring owner.

Of course, the terms, conditions, price and so many other points are omitted from that conversation. And even if they are discussed, what happens if the owner dies before the sale takes place? Unless these matters are written down, the single largest asset of someone’s estate will remain unguarded.

An old Yiddish proverb states: “Man plans and God laughs.” If the offer of future ownership is important to the employee, it should be in writing. Do not trust anything as fragile as life or memories.

Many people don’t want to put these things in writing because they want to avoid legal fees. Trust me, failing to have good representation at the beginning of a contract will result in paying huge legal fees in the future! A single day in a courtroom requires about 10 days of a lawyer’s time in preparation. Thus, your desire to avoid a few hours of a lawyer’s time in drafting a document will increase twentyfold or more if you have to enforce what you thought was a previously established agreement. And that is just the lawyer’s fees; expert witnesses (especially good ones) are expensive as well.