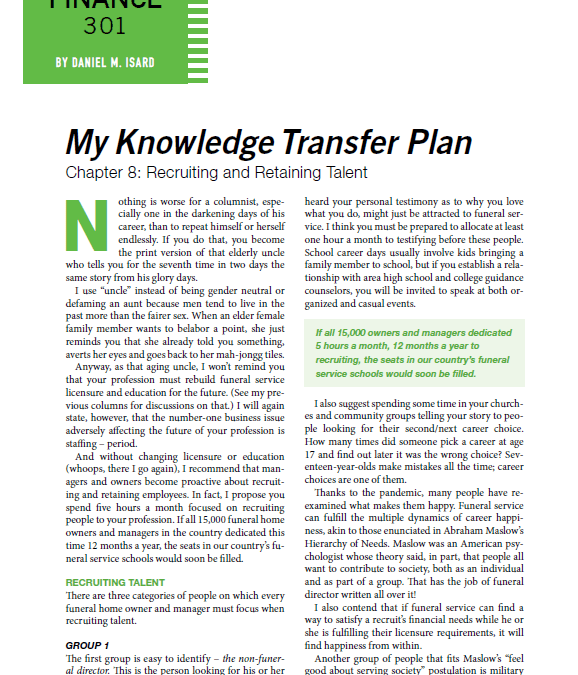 Nothing is worse for a columnist, especially one in the darkening days of his career, than to repeat himself or herself endlessly. If you do that, you become the print version of that elderly uncle who tells you for the seventh time in two days the same story from his glory days.

I use “uncle” instead of being gender neutral or defaming an aunt because men tend to live in the past more than the fairer sex. When an elder female family member wants to belabor a point, she just reminds you that she already told you something, averts her eyes and goes back to her mah-jongg tiles.

Anyway, as that aging uncle, I won’t remind you that your profession must rebuild funeral service licensure and education for the future. (See my previous columns for discussions on that.) I will again state, however, that the number-one business issue adversely affecting the future of your profession is staffing – period.

And without changing licensure or education (whoops, there I go again), I recommend that managers and owners become proactive about recruiting and retaining employees. In fact, I propose you spend five hours a month focused on recruiting people to your profession. If all 15,000 funeral home owners and managers in the country dedicated this time 12 months a year, the seats in our country’s funeral service schools would soon be filled.

There are three categories of people on which every funeral home owner and manager must focus when recruiting talent.

The first group is easy to identify – the non-funeral director. This is the person looking for his or her first, or a subsequent, career. Now, there are many kids looking for a purpose in this world who, if they heard your personal testimony as to why you love what you do, might just be attracted to funeral service. I think you must be prepared to allocate at least one hour a month to testifying before these people. School career days usually involve kids bringing a family member to school, but if you establish a relationship with area high school and college guidance counselors, you will be invited to speak at both organized and casual events.

I also suggest spending some time in your churches and community groups telling your story to people looking for their second/next career choice. How many times did someone pick a career at age 17 and find out later it was the wrong choice? Seventeen-year-olds make mistakes all the time; career choices are one of them.

Thanks to the pandemic, many people have reexamined what makes them happy. Funeral service can fulfill the multiple dynamics of career happiness, akin to those enunciated in Abraham Maslow’s Hierarchy of Needs. Maslow was an American psychologist whose theory said, in part, that people all want to contribute to society, both as an individual and as part of a group. That has the job of funeral director written all over it!

I also contend that if funeral service can find a way to satisfy a recruit’s financial needs while he or she is fulfilling their licensure requirements, it will find happiness from within.

Another group of people that fits Maslow’s “feel good about serving society” postulation is military veterans. There is currently an initiative that looks to the huge veteran population to recruit talent, and you should find a way to become a part of that. Visit journeytoserve.com for more information.

The second group of recruits consists of existing funeral service licensees. This is the group most people focus on when they need to hire staff, and typically, funeral directors hire people who look like them. To put it another way, if you are a man doing the hiring, then you typically look to hire a man.

Well, that must change. A huge number of women now graduate from the country’s funeral service schools, and the old “male-dominated profession” is evolving into a “pink-collared profession” whether you want it to or not.

I have heard every reason why men don’t want to hire women, and those reasons are just flat out stupid. “She might not be strong enough to make a house removal” is one I hear all the time. Well, she might not be, but neither is “Old Jed” who, at age 62, has a bad back. There are options, and funeral homes can work around all of them, just as they have worked around Old Jed’s limitations.

Another one I hear is, “Ours is a [insert religion] funeral home.” Well, how is that working for you lately? How many who are reading this worked for a Jewish firm while in funeral service school because there were not enough Jewish funeral directors to fill the jobs? How about extending your marketing footprint around the new hire? Funeral service must not be limited by religion in its hiring. Beyond the fact that it could be a labor violation, it also happens to be stupid. I can educate anyone on how to run a funeral regardless of their religion – even the nonreligious.

Next, I need to address the 800-pound gorilla in the room, i.e., race. Roughly 20 years ago, I heard a presentation by a demographer who predicted that racial prejudice would decline in this country because demographers had forecasted that 20% or more of all births after 2020 would involve mixed-race children. While we’re still waiting for the latest data, that rate had already hit 14% in 2015, according to Pew Research.

This year also marks the 55th anniversary of the U.S. Supreme Court case Loving vs. Virginia, the landmark civil rights case that made it illegal for a state to bar interracial marriage. Moreover, people can no longer discriminate when it comes to choosing employees during the hiring process, thanks to Title VII of the Civil Rights Act of 1964.

Clearly, we are moving toward an assimilated racial society. Therefore, recruit people other than your own race and break through your personal recruiting and hiring barriers.

The third recruit group comprises licensees who are unhappy with their current employment. If you are hiring, let the world know! Run ads. Employ a headhunter. If you think executive recruiters don’t work, you’re wrong. The big guys use them very successfully. In addition, use online services such as LinkedIn and other job search engines.

Finally, remember the story about the poor preacher who, after asking the Lord to help him win the lottery so he could further the mission of his church and also provide for his family, hears a voice from the heavens say, “Preacher, meet me halfway. Buy a ticket.”

If you are recruiting, meet the prospective candidate halfway.

Retaining an employee starts with a written job description. You know – the very one you used when you began the meeting with the person you recruited. By later referring to this job description, you can see what you hired someone to do and then determine how well he or she is meeting those expectations.

Another key to retaining someone is making sure his or her work progresses along the lines of your expectations. Therefore, use that written job description as a basis for formal, regular reviews. And yes, the reviews should also be in writing. Be honest and concrete, and refer to it in the future.

In terms of employee benefits, some are better than others. One such benefit is continuing education. This is something you can you provide, as the employer, to help an employee become better at his or her job. Employees appreciate that their employer cares about their personal growth.

Bonuses offer another solid retaining tool, but there are some things to be aware of when structuring bonuses. First, keep the calculation of the bonus simple. If you need to, ask a third party to compute and manage your bonuses. Give the employee the computation of the bonus on a scheduled basis, such as quarterly. In addition, bonuses should not be vested, meaning that if someone leaves your employment before the end of the bonus period, he or she will not receive the bonus.

I also love offering ownership as a retaining tool. Yes, ownership might get expensive, but the fees for hiring a highly paid employee via a headhunter can be expensive as well. This bonus could be structured as a payment-out, post-retirement or upon termination. The payment-out could be a funding for a promise not to compete. Don’t confuse this with a Covenant Not to Compete, however; this is a benefit for not competing, and if someone chooses to compete, he or she loses this payment.

I mentioned that offering ownership might be expensive, but it could also prove cheap. Imagine if this key person becomes your successor. Imagine if you lock in your successor with favorable tax-savings consequences and without brokerage fees!

Finally, stock ownership offers another strong retention benefit because it vests someone in their own future. Remember, it’s tough to quit yourself.

In conclusion, did I mention that funeral service must change its methodology for licensing and education? I did? Well, just call me “Uncle Danny.”