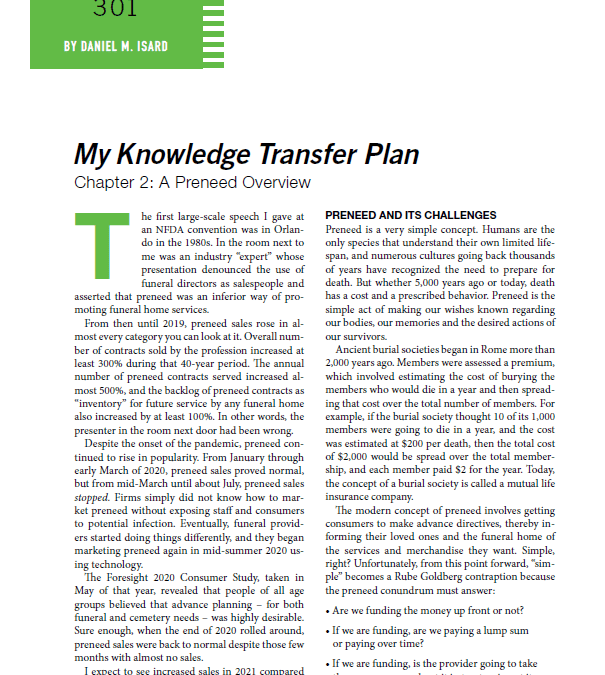 The first large-scale speech I gave at an NFDA convention was in Orlando in the 1980s. In the room next to me was an industry “expert” whose presentation denounced the use of funeral directors as salespeople and asserted that preneed was an inferior way of promoting funeral home services.

From then until 2019, preneed sales rose in almost every category you can look at it. Overall number of contracts sold by the profession increased at least 300% during that 40-year period. The annual number of preneed contracts served increased almost 500%, and the backlog of preneed contracts as “inventory” for future service by any funeral home also increased by at least 100%. In other words, the presenter in the room next door had been wrong.

Despite the onset of the pandemic, preneed continued to rise in popularity. From January through early March of 2020, preneed sales proved normal, but from mid-March until about July, preneed sales stopped. Firms simply did not know how to market preneed without exposing staff and consumers to potential infection. Eventually, funeral providers started doing things differently, and they began marketing preneed again in mid-summer 2020 using technology.

The Foresight 2020 Consumer Study, taken in May of that year, revealed that people of all age groups believed that advance planning – for both funeral and cemetery needs – was highly desirable. Sure enough, when the end of 2020 rolled around, preneed sales were back to normal despite those few months with almost no sales.

I expect to see increased sales in 2021 compared to last year. A pandemic shapes the minds of its survivors, and advance planning was a change to the psyche of many. Preneed is here to stay.

Preneed and Its Challenges

Preneed is a very simple concept. Humans are the only species that understand their own limited life-span, and numerous cultures going back thousands of years have recognized the need to prepare for death. But whether 5,000 years ago or today, death has a cost and a prescribed behavior. Preneed is the simple act of making our wishes known regarding our bodies, our memories and the desired actions of our survivors.

Ancient burial societies began in Rome more than 2,000 years ago. Members were assessed a premium, which involved estimating the cost of burying the members who would die in a year and then spreading that cost over the total number of members. For example, if the burial society thought 10 of its 1,000 members were going to die in a year, and the cost was estimated at $200 per death, then the total cost of $2,000 would be spread over the total membership, and each member paid $2 for the year. Today, the concept of a burial society is called a mutual life insurance company.

The modern concept of preneed involves getting consumers to make advance directives, thereby informing their loved ones and the funeral home of the services and merchandise they want. Simple, right? Unfortunately, from this point forward, “simple” becomes a Rube Goldberg contraption because the preneed conundrum must answer:

Obviously, navigating this maze takes a study of federal and state law, financial and economic modeling, salesmanship, marketing and money management. It might require accreditation in embalming and insurance sales as well.

How did we take something so simple and basic and make it require a dozen points of consideration by a funeral home? The money makes it complex. If a consumer doesn’t want to prepay for his or her funeral, then the bullet points following the first one above are moot, which begs the question, “What is so important about getting the money?”

To me, there are two key reasons for securing the money. First, if a consumer is trying to qualify for SSI, then prepayment of their funeral arrangements (subject to state limitations) could help him or her spend down assets to qualify. Second, if a consumer prepays for a funeral with one funeral home, the odds are overwhelming that no other funeral home will be able to change that consumer’s decision.

I can already picture the emails and letters pouring in from every insurance and trust company marketing person talking about the consumer’s well-being after preplanning and prefunding their own funeral. I get all that, but there is a trade-off: On one hand, there are myriad questions that must be addressed (as shown above); on the hand rests the ability to serve the family.

I will tackle the bullet points above next month, item by item, but I will conclude this column by addressing the transferability of a preneed account. When someone enters a preneed contract, they are not making a deposit (regardless of whether it’s funded by trust or insurance). They are, in fact, making a payment to purchase today various services and merchandise that will be called on for delivery in the future.

That future delivery date is critical for several reasons, but for this discussion, that future delivery will occur either at the present location or a future location. Transferability becomes an issue when a different location is required in the future. This involves a minority of cases, but I bet you still bite your lip when you get a first call and a family tells you their loved one has a preneed funeral contract in another state. The family thinks, “This is going to be easy,” but the director on the receiving side thinks, “Oh, no, what state will they be transferring the deceased from?”

The reason for this reaction is that not all states give full credit. Certainly, insurance-funded arrangements are easier to transfer from most states, but if a state does not mandate 100% trusting, then the funeral home on the receiving end must provide a long-winded explanation to the family. And for some families, the initiating firm, the servicing firm and/or the process in general will lose all credibility.

I get that preneed is a “state’s rights” issue. I have read the U.S. Constitution and know that the 10th Amendment says: “The powers not delegated to the United States by the Constitution, nor prohibited by it to the states, are reserved to the states respectively, or to the people.” In simple terms, the federal government cannot interfere with something a state has the right to govern.

The federal government regulates matters of intrastate commerce, however. Thus, while states might have the right to govern preneed, an increasing number of preneed transfers cross state lines. As our population grows more mobile, it’s only a matter of time before someone challenges the rights of a state in the context of preneed.

Preneed involves a unique contract in the eyes of the law. Deemed an “executory contract,” both parties have entered into the agreement yet both still have important performance obligations to fulfill. From the funeral provider side, the firm must deliver the funeral and/or merchandise at a later time. On consumers’ side, they must die for the contract to be executed.

More on this subject, and navigating the preneed minefield, next month.