Finance 301: Chapter 11: Marketing to Your Friends and Adversaries 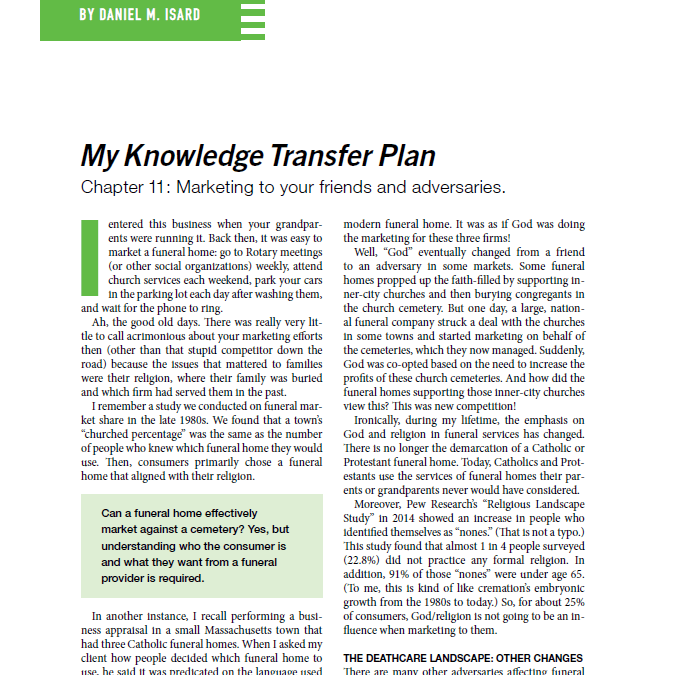 I entered this business when your grandparents were running it. Back then, it was easy to market a funeral home: go to Rotary meetings (or other social organizations) weekly, attend church services each weekend, park your cars in the parking lot each day after washing them, and wait for the phone to ring.

Ah, the good old days. There was really very little to call acrimonious about your marketing efforts then (other than that stupid competitor down the road) because the issues that mattered to families were their religion, where their family was buried and which firm had served them in the past.

I remember a study we conducted on funeral market share in the late 1980s. We found that a town’s “churched percentage” was the same as the number of people who knew which funeral home they would use. Then, consumers primarily chose a funeral home that aligned with their religion.

Well, “God” eventually changed from a friend to an adversary in some markets. Some funeral homes propped up the faith-filled by supporting inner-city churches and then burying congregants in the church cemetery. But one day, a large, national funeral company struck a deal with the churches in some towns and started marketing on behalf of the cemeteries, which they now managed. Suddenly, God was co-opted based on the need to increase the profits of these church cemeteries. And how did the funeral homes supporting those inner-city churches view this? This was new competition!

Ironically, during my lifetime, the emphasis on God and religion in funeral services has changed. There is no longer the demarcation of a Catholic or Protestant funeral home. Today, Catholics and Protestants use the services of funeral homes their parents or grandparents never would have considered.

Moreover, Pew Research’s “Religious Landscape Study” in 2014 showed an increase in people who identified themselves as “nones.” (That is not a typo.) This study found that almost 1 in 4 people surveyed (22.8%) did not practice any formal religion. In addition, 91% of those “nones” were under age 65. (To me, this is kind of like cremation’s embryonic growth from the 1980s to today.) So, for about 25% of consumers, God/religion is not going to be an influence when marketing to them.

The Deathcare Landscape: Other Changes

There are many other adversaries affecting funeral service these days. In some cases and in some places, hospice has changed from a colleague to an adversary over time. Of course, “hospice” is not one entity but a single concept with more than 4,600 for-profit and not-for-profit entities providing palliative care services. When looking at hospice nationwide, more than half of all Medicare decedents (50.7%) were enrolled in hospice at the time of their deaths, a number that will only continue to grow because more deaths involve those above age 65.

Concerning deaths in hospice, funeral service professionals often hear that three things are espoused as part of the communication with the families of hospice patients: first, that it is more important to say goodbye during the patient’s lifetime; second, if families do the first, then the purpose of the funeral becomes more ceremonial; and third, if the funeral is merely ceremonial, then families should spend modestly on the funeral.

If you think the relationship with a family from your perspective is intense, then understand that it is even more so with hospice nurses and administrators. For most patients, hospice care is usually funded by either insurance or Medicare, possibly requiring a modest co-payment at best. That doesn’t mean that hospice is “free,” just that the patient’s family doesn’t bear the payment obligation for the professional fees and supplies. They do have to pay for your fees and merchandise, however.

Another change in the landscape of funeral service involves demographics. Previously, when a firm served a family, it assumed the phrase “my family” because odds were you would serve them again in the future. Occasionally, that scoundrel up the road would poach one of “your” families, inflaming your ulcer, but what could you do?

Ironically, the matter of previous service by a firm is still one of the largest factors families cite when explaining why they chose a particular funeral home. That’s a relief… Or is it? I credit Ed Michael Reggie, founder of Funeralocity.com, with making me aware of “movers,” a demographic term that measures how many adults relocate more than 500 miles without the expectation that it is a temporary move. Movers settling into a new community must learn over time where the good pizza places are, who the best doctors are, and at some point, what funeral home to use. They do not know the “heritage” funeral home and have no previous service provider. Instead, they make their patronage decision based on their own criteria.

Yet another change to deathcare involves cemeteries, which used to be “passive marketing companies.” Back then, if dad died, the cemetery sold two graves to mom, or maybe more if she wanted to keep the family together.

Cemeteries placing a funeral home on their property, however, is something various states legislated against out of fear. These “anti-combo” laws were intended to protect funeral home owners. Instead, they actually built a fence around funeral homes.

Can a funeral home effectively market against a cemetery? Well, given a national cremation rate approaching 60% and with just 41% of those remains being inurned in a cemetery, the answer is a resounding yes. What is required, however, is understanding who the funeral consumer is and what they want from a funeral provider.

So, if you are marketing your firm today and still rely on the same three criterion your grandparents did, then you will find yourself in trouble.

Marketing Today and Beyond

How do you market your business to today’s consumer? Well, first understand that only a minority of them want a whole-body burial. You are already equipped to provide that service.

What do the majority of consumers want? According to NFDA’s 2022 Consumer Awareness and Preferences Survey, 93.7% of those attending a burial service found the service “very helpful” or “adequate” in paying tribute to/commemorating the life of their loved one. About the same percentage (92.2%) was registered for those attending a cremation service.

Anyway, going forward, how can you change your marketing to account for a diminishing religious influence, the reduced emphasis on previous service and the declining importance of the cemetery? I think you must get more aggressive in your marketing! First, get out into your community more. You need to sponsor programs that help survivors grieving a loved one’s death. I know that outreach and aftercare work in establishing a reliance between community members and funeral homes.

You need to grow preneed arrangements, too. People choosing preneed are most likely to use their chosen firm for the services they selected at the time.

Also, you must educate hospice staff about what your firm does for families. In markets in which I’ve seen funeral home owners instruct local hospice teams on the importance of the funeral, those firms earned an ally.

Most importantly, purge from your mind the question of “why” people choose cremation. Selecting cremation is not a condemnation of what you provide as a funeral professional. Instead, it’s a disposition and service choice that fits the consumer’s ideal.

And since they are paying for it, you should give them what they want.