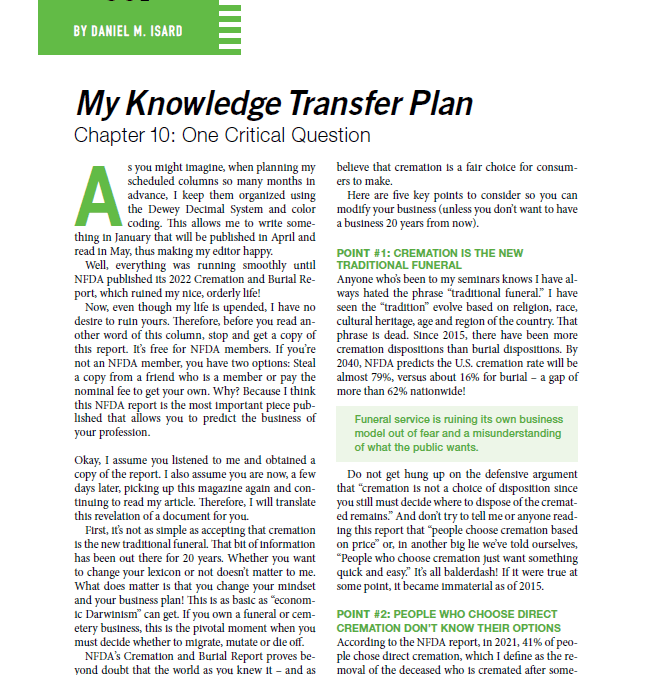 As you might imagine, when planning my scheduled columns so many months in advance, I keep them organized using the Dewey Decimal System and color coding. This allows me to write something in January that will be published in April and read in May, thus making my editor happy.

Well, everything was running smoothly until NFDA published its 2022 Cremation and Burial Report, which ruined my nice, orderly life!

Now, even though my life is upended, I have no desire to ruin yours. Therefore, before you read another word of this column, stop and get a copy of this report. It’s free for NFDA members. If you’re not an NFDA member, you have two options: Steal a copy from a friend who is a member or pay the nominal fee to get your own. Why? Because I think this NFDA report is the most important piece published that allows you to predict the business of your profession.

Okay, I assume you listened to me and obtained a copy of the report. I also assume you are now, a few days later, picking up this magazine again and continuing to read my article. Therefore, I will translate this revelation of a document for you.

First, it’s not as simple as accepting that cremation is the new traditional funeral. That bit of information has been out there for 20 years. Whether you want to change your lexicon or not doesn’t matter to me. What does matter is that you change your mindset and your business plan! This is as basic as “economic Darwinism” can get. If you own a funeral or cemetery business, this is the pivotal moment when you must decide whether to migrate, mutate or die off.

NFDA’s Cremation and Burial Report proves beyond doubt that the world as you knew it – and as your parents who owned the business before you and your grandparents who started the business knew it – has fundamentally changed. Your business will not make it to the next generation unless you believe that cremation is a fair choice for consumers to make.

Here are five key points to consider so you can modify your business (unless you don’t want to have a business 20 years from now).

Anyone who’s been to my seminars knows I have always hated the phrase “traditional funeral.” I have seen the “tradition” evolve based on religion, race, cultural heritage, age and region of the country. That phrase is dead. Since 2015, there have been more cremation dispositions than burial dispositions. By 2040, NFDA predicts the U.S. cremation rate will be almost 79%, versus about 16% for burial – a gap of more than 62% nationwide!

Do not get hung up on the defensive argument that “cremation is not a choice of disposition since you still must decide where to dispose of the cremated remains.” And don’t try to tell me or anyone reading this report that “people choose cremation based on price” or, in another big lie we’ve told ourselves, “People who choose cremation just want something quick and easy.” It’s all balderdash! If it were true at some point, it became immaterial as of 2015.

According to the NFDA report, in 2021, 41% of people chose direct cremation, which I define as the removal of the deceased who is cremated after someone confirms identification of the body, and the return of the cremated remains without any services before or after requiring the service of a funeral director or the facilities of a funeral business.

I don’t care why those people chose direct cremation. If I go into a restaurant and order a steak and a glass of water, and the server does not educate me about the available appetizers, drinks, side dishes and desserts, then shame on the restaurant. I just ordered a “direct dinner.”

Funeral service is 40 years behind on educating consumers about how to hold a funeral when the body is not featured or a convocation is not called for. During this time, the profession has instead encouraged people to talk with family about end-of-life plans, lauded the merits of a family business versus corporate funeral homes and, of course, the importance of the casket in funeral planning. Stop! Read the room!

In addition, the U.S. population continues to grow, expanding from roughly 265 million in 1995 to more than 320 million in 2015. By 2050, the U.S. Census Bureau projects the population will grow to 458 million. Therefore, total deaths will grow from the present estimate of 3.3 million to roughly 4.6 million in 20 years.

That said, funeral service staffing and its education and licensing is still predicated on embalming bodies. As the president of an international company said to me, “When I can’t sleep at night, it is because I’m wondering where we are going to find the staff to work at our locations.”

Understaffed today, it can only get worse in the future. Imagine if you hired no additional staffing and your case count increased by 33%!

Cremation cases generally produce about 40% less revenue per call than burial cases, a fact that continues to fascinate me. Who sets the pricing for the burial and cremation service fees your business charges? Some government agency, like those charged by a utility company? No, you set the pricing!

Thus, if I told you a direct burial (without a container, grave space or graveliner) was more expensive than a direct cremation, you would not be surprised. Yet if I asked you to write down all the tasks necessary for you or a staff member to complete each of these two services, would you be surprised that the dozen or so tasks on those two lists are almost identical? In other words, if the two require similar tasks, why set your direct cremation fees lower than those for direct burial?

Funeral service is ruining its own business model out of fear and a misunderstanding of what the public wants.

If your facility burned down tonight, would you rebuild it exactly the same? Same size? Same features? Same location? Would you want to have a crematory in it? Or perhaps you would even rebuild. Or maybe you’d just take the insurance money and retire to Del Boca Vista like Morty Seinfeld.

Now that you’ve read the 2022 NFDA Cremation and Burial Report and this column, I pose the one critical question funeral service must answer: What reforms are necessary for this profession to be profitable, attract and retain top-notch talent and provide good service consumers want to pay for?

Moreover, regardless of what the national, state and peer groups do, this is something you must resolve or you’ll face economic ruin.

This latest report should be a clarion call to everyone; you’re either living this reality already or you will be soon. Do not invest another cent in your existing business without formulating a 20-year game plan – and don’t leave your exit strategy out of that plan.

These are not the ramblings of an old man. This is a love letter. I beseech you – migrate, mutate or die off.