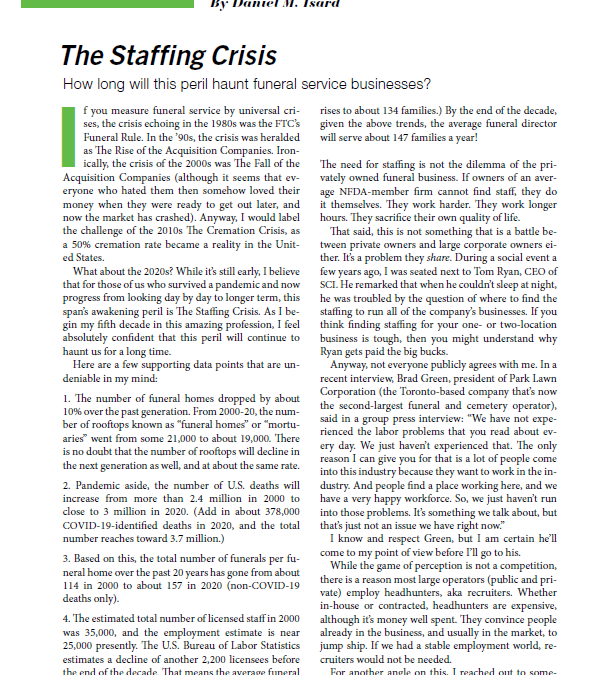 How long will this peril haunt funeral service businesses?

If you measure funeral service by universal crises, the crisis echoing in the 1980s was the FTC’s Funeral Rule. In the ’90s, the crisis was heralded as The Rise of the Acquisition Companies. Ironically, the crisis of the 2000s was The Fall of the Acquisition Companies (although it seems that everyone who hated them then somehow loved their money when they were ready to get out later, and now the market has crashed). Anyway, I would label the challenge of the 2010s The Cremation Crisis, as a 50% cremation rate became a reality in the United States.

What about the 2020s? While it’s still early, I believe that for those of us who survived a pandemic and now progress from looking day by day to longer term, this span’s awakening peril is The Staffing Crisis. As I begin my fifth decade in this amazing profession, I feel absolutely confident that this peril will continue to haunt us for a long time.

Here are a few supporting data points that are undeniable in my mind:

The need for staffing is not the dilemma of the privately owned funeral business. If owners of an average NFDA-member firm cannot find staff, they do it themselves. They work harder. They work longer hours. They sacrifice their own quality of life.

That said, this is not something that is a battle between private owners and large corporate owners either. It’s a problem they share. During a social event a few years ago, I was seated next to Tom Ryan, CEO of SCI. He remarked that when he couldn’t sleep at night, he was troubled by the question of where to find the staffing to run all of the company’s businesses. If you think finding staffing for your one- or two-location business is tough, then you might understand why Ryan gets paid the big bucks.

Anyway, not everyone publicly agrees with me. In a recent interview, Brad Green, president of Park Lawn Corporation (the Toronto-based company that’s now the second-largest funeral and cemetery operator), said in a group press interview: “We have not experienced the labor problems that you read about every day. We just haven’t experienced that. The only reason I can give you for that is a lot of people come into this industry because they want to work in the industry. And people find a place working here, and we have a very happy workforce. So, we just haven’t run into those problems. It’s something we talk about, but that’s just not an issue we have right now.”

I know and respect Green, but I am certain he’ll come to my point of view before I’ll go to his.

While the game of perception is not a competition, there is a reason most large operators (public and private) employ headhunters, aka recruiters. Whether in-house or contracted, headhunters are expensive, although it’s money well spent. They convince people already in the business, and usually in the market, to jump ship. If we had a stable employment world, recruiters would not be needed.

For another angle on this, I reached out to someone who can speak on this concern from many angles, Curtis Rostad, whose career has touched so many facets of this issue. Rostad entered the business of his own choosing, without any parental guilt. He was an owner. He was state association director for Wyoming, Colorado and Indiana. He was director of education for two national acquisition/operating companies. Rostad currently works for The Foresight Companies on a part-time basis, assisting clients in the areas of human resources and OSHA and FTC compliance. Thus, his perspective reflects many viewpoints. On top of this, he is one of the few people I listen to if he says I am wrong.

First, I asked Rostad if finding a solution to the staffing crisis, as I perceive it, is imperative. “It is our future. Funeral homes don’t run without personnel,” he replied and then reminded me that staff, benefits and tax expense make up the single largest component to the overhead of running a funeral business. In the best cases, staffing is no more than 26% of revenue, but in the worst cases, it can be as much as 45% of revenue.

Explained Rostad: “Staffing is the key dynamic to determining if you are going to be successful. It is not the size of your building or its location; it is the relationship that families have built with the owners and employees.”

We then discussed the prerequisites of becoming a licensed director. The basic education may require the candidate to have a full four-year college degree in some states and simply a GED in others. Shouldn’t there be some consistency in state regulations? In addition, while all states use the National Board Exam, once licensed, there is a wide range of continuing education requirements. With a cynical smile on his face, Rostad replied, “We have 50 states. They are all autonomous. They will all do as they will.”

Rostad next reflected on the work done by Jacquelyn S. Taylor, Ph.D., the well-known and -respected educator, funeral director, embalmer and – most significantly – thought leader. Starting as a teacher at San Francisco College of Mortuary Science, Taylor soon became executive director at New England Institute of Funeral Service Education. Her passion was to answer the question, “Is funeral service a trade or a profession?” Unfortunately, in 2019, Taylor died at age 66, leaving future generations to debate this question.

The question she pondered and Rostad discussed is not simple. On one hand, if funeral service is a profession, then practitioners need more education, more continuing education and more compensation for performing their work. On the other hand, if funeral service is a trade, then practitioners need a minimum education that focuses on a technical curriculum and just refresher courses in the future. The profession, its leaders and supporters, however, cannot reach a unified conclusion.

Rostad commented that he himself has come full circle, musing, “Maybe you don’t need more of an education to help someone make funeral arrangements. Embalming, maybe, is more of a trade than a profession.”

Bringing it back to the issue of state requirements, he added, “As long as we have this diverse opinion within the states, there is no way we will get a consensus of opinion to agree on a certain path.”

Rostad elaborated: “We have had a long-running feud between the licensing boards and the educational boards.” These two influencing groups have different thoughts, agendas and philosophies. “It is not likely they will agree on a path forward,” he concluded.

From the perspective of state-level licensing requirements, Rostad served as the executive director of the Colorado association shortly after the state dismissed all licensing requirements. He remembered being part of the group trying to reintroduce the need for a license: “We came up short. Funeral service could not point to incidents that would have been prevented had there been licensing.”

So, wondering what might prove to be the long-term solution to bring more people into the profession, I asked Rostad if eventual business ownership was a possible solution. Comparing his days in funeral service school with the student groups to which he’d spoken more recently as Indiana association executive director, he replied, “It was a complete reversal. I was surprised. In my class, almost all of us wanted to be owners of our own funeral homes. In some cases, it was getting dad or mom out of the family-owned place.”

Conversely, at a meeting he had in Indiana with students, he noted, “In a class of 30 people, maybe only two had the ultimate goal of buying a funeral home.” Clearly, the funeral service class of today is different from Rostad’s class 40-some years ago. He elaborated: “You don’t go to the school and talk to kids going out of high school and into college. Many of these are formerly stay-at-home moms or retired military or other second-career people.”

The contrast between then and now is important to understand. Said Rostad, with great clarity: “I remember my class had 95 people. We had three women [two minority women were there on their own and another was the wife of a male student]. Typically, what I am seeing in the mortuary schools today are women.”

The solution is complex and will require leadership. We must alter licensure requirements and, therefore, alter education to prepare the profession’s future employees, leaders and owners. We must make changes on the state and national levels. If we do not, then we must be prepared to do more work virtually because one person will not be able to work 220 days a year (the typical employment year) and make almost 150 arrangements! Let’s lead from the front on this issue.