Chapter Five: Reinvesting in Your Business 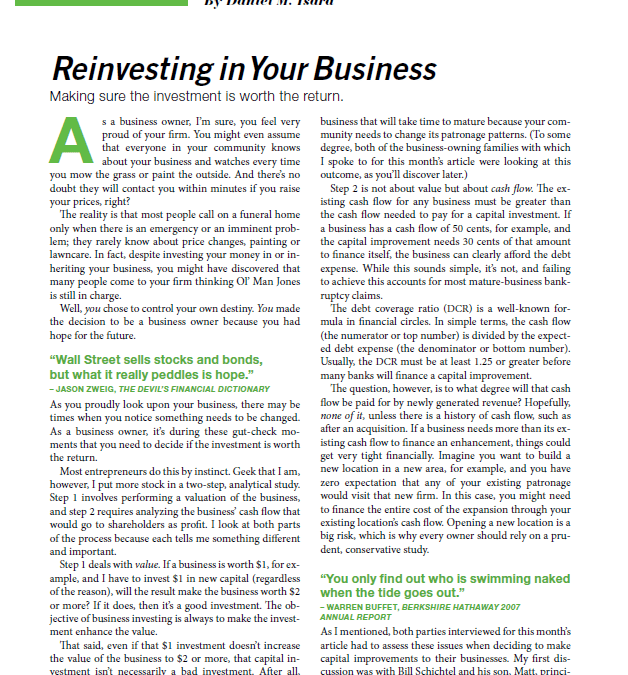 Making sure the investment is worth the return.

As a business owner, I’m sure, you feel very proud of your firm. You might even assume that everyone in your community knows about your business and watches every time you mow the grass or paint the outside. And there’s no doubt they will contact you within minutes if you raise your prices, right?

The reality is that most people call on a funeral home only when there is an emergency or an imminent problem; they rarely know about price changes, painting or lawncare. In fact, despite investing your money in or inheriting your business, you might have discovered that many people come to your firm thinking Ol’ Man Jones is still in charge.

Well, you chose to control your own destiny. You made the decision to be a business owner because you had hope for the future.

“Wall Street sells stocks and bonds, but what it really peddles is hope.”
– Jason Zweig, The Devil’s Financial Dictionary

As you proudly look upon your business, there may be times when you notice something needs to be changed. As a business owner, it’s during these gut-check moments that you need to decide if the investment is worth the return.

Most entrepreneurs do this by instinct. Geek that I am, however, I put more stock in a two-step, analytical study. Step 1 involves performing a valuation of the business, and step 2 requires analyzing the business’ cash flow that would go to shareholders as profit. I look at both parts of the process because each tells me something different and important.

Step 1 deals with value. If a business is worth $1, for example, and I have to invest $1 in new capital (regardless of the reason), will the result make the business worth $2 or more? If it does, then it’s a good investment. The objective of business investing is always to make the investment enhance the value.

That said, even if that $1 investment doesn’t increase the value of the business to $2 or more, that capital investment isn’t necessarily a bad investment. After all, sometimes you have to pay for seed knowing the crop won’t be realized until some point in the future. In funeral service, you often make investments to grow your business that will take time to mature because your community needs to change its patronage patterns. (To some degree, both of the business-owning families with which I spoke to for this month’s article were looking at this outcome, as you’ll discover later.)

Step 2 is not about value but about cash flow. The existing cash flow for any business must be greater than the cash flow needed to pay for a capital investment. If a business has a cash flow of 50 cents, for example, and the capital improvement needs 30 cents of that amount to finance itself, the business can clearly afford the debt expense. While this sounds simple, it’s not, and failing to achieve this accounts for most mature-business bankruptcy claims.

The debt coverage ratio (DCR) is a well-known formula in financial circles. In simple terms, the cash flow (the numerator or top number) is divided by the expected debt expense (the denominator or bottom number). Usually, the DCR must be at least 1.25 or greater before many banks will finance a capital improvement.

The question, however, is to what degree will that cash flow be paid for by newly generated revenue? Hopefully, none of it, unless there is a history of cash flow, such as after an acquisition. If a business needs more than its existing cash flow to finance an enhancement, things could get very tight financially. Imagine you want to build a new location in a new area, for example, and you have zero expectation that any of your existing patronage would visit that new firm. In this case, you might need to finance the entire cost of the expansion through your existing location’s cash flow. Opening a new location is a big risk, which is why every owner should rely on a prudent, conservative study.

“You only find out who is swimming naked when the tide goes out.”
– Warren Buffet, Berkshire Hathaway 2007 annual Report

As I mentioned, both parties interviewed for this month’s article had to assess these issues when deciding to make capital improvements to their businesses. My first discussion was with Bill Schichtel and his son, Matt, principal owners of Heath Funeral Chapel in Lakeland, Florida. Bill’s father-in-law, Foster Heath, started the business in 1959 but, faced with no visible successor, contemplated finding a buyer in 1988. The business at a crossroads, his daughter, Caroline, and her husband, Bill, elected to return to Lakeland to carry on the business, with Bill earning his license. (Today, son Matt carries on this same funeral service commitment.)

In 2005, Heath and Bill Schichtel were pondering two options: build a new location or build a large reception center/community room/cremation center at their existing location. After visiting a firm about 80 miles away and its tribute and cremation centers, they realized that less could actually be more and thus chose to build their tribute and reception center on the existing site, expanding the firm’s internal space by 5,000 square feet. A local architect designed the space.

Said Bill: “We have 4,000 [square feet] for the tribute center and 1,000 for the crematory. We designed the crematory area for either witnessing a cremation or for private body identification.”

The private ID area is well used, confirmed Matt: “Prior to COVID-19, families were required to ID at our facility if they were not present when we took control of their loved one. The option to witness cremations is usually elected by all Buddhist and Hindu families.”

The reception center has also been a differentiator in their market, he added. “We have our own caterer; families can choose from modest menu options to more elaborate options for food. We also have a beer and wine license for families that wish to have alcohol at their receptions.” I asked Matt if there were any negative reactions to the alcohol offerings, and he replied, “No. Families that don’t want it don’t choose it. Others are accustomed to having beer and wine with food.”

Matt estimated that almost 90% of the families the firm serves come back to use the reception area. It’s also used for community meetings, including about 130 people attending an annual Rotary meeting, as well as aftercare and outreach programming.

I also spoke with Diann and Stephen Anderson, owners of Anderson Funeral Home in Belvidere, Illinois, who wrestled with how to convert their older building into a modern facility. Their problem was that the designs they wanted to create, at a minimum, were too expensive.

Steve shared that the original building dated from 1904 and that two additions had since been made, neither of which prepared the building for its second century of use. “The community has embraced our facility due to its homelike atmosphere, but like a home with one bathroom, it’s not up for large gatherings,” he explained.

The Andersons realized that their future required a facility that not only moved beyond a pull-rope elevator but also offered adequate room for body storage, cremation and a reception area. The original facility was in the middle of a residential area, with nothing around it for sale. “We did not want to have our professional service area apart from our funeral building, as that would cause pitfalls and staffing issues,” said Steve. “Through a lot of prayer, the property immediately behind us came up for sale, and then the one next to us.”

Added Diann: “I was out one morning and noticed a neighbor throwing out some household effects. I asked why and learned the couple that owned the home were going through a divorce. We bought the home from the ex-husband.”

While prayer and being prepared gave them the space to build, Steve was clear about some mistakes they made early on in their planning. “I probably have a Ph.D. now in going through this, and the tuition has not been inexpensive.” The mistakes involved professional fees in dealing with the architects.

Noted Diann: “We started out seven years ago to renovate the interior. We took great care to try and restore it back to its original integrity. This included a lot of expensive custom construction of doors and much more.”

Despite this, the basics of the building still did not fit their long-term aspirations, so the solution was to create a shared facility adjacent to the existing one. This new construction in the added space will provide the funeral home building of the future.

Said Steve as he summed up his five-year journey: “We are now able to enhance the neighborhood and beautify the area we occupy.”

“You can use an eraser on the drafting table, or a sledgehammer on the construction site.”
– Frank Lloyd Wright

Financing is a reality for any major capital investment. In the case of Heath Funeral Home, the retired founder financed the expenditure from his personal savings. With Anderson Funeral Home, Steve shared, “That was another part of the expensive learning process I went through.”

To watch the video interview for this article, visit our YouTube Channel by clicking this link: youtube.com/watch?v=LauwcuuWGWc