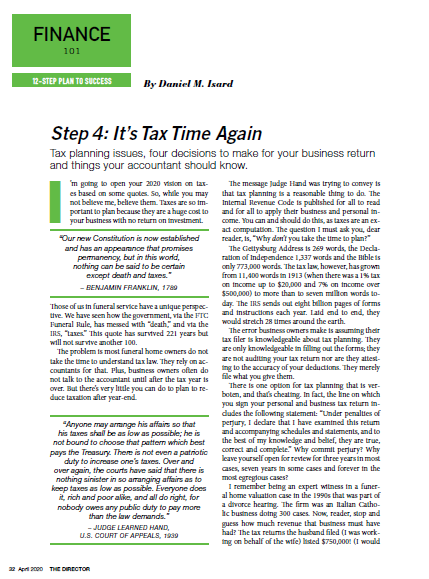 Tax planning issues, four decisions to make for your business return
and things your accountant should know.

I’m going to open your 2020 vision on taxes based on some quotes. So, while you may not believe me, believe them. Taxes are so important to plan because they are a huge cost to your business with no return on investment.

“Our new Constitution is now established and has an appearance that promises
permanency, but in this world, nothing can be said to be certain except death and taxes.”
– Benjamin Franklin, 1789

Those of us in funeral service have a unique perspective. We have seen how the government, via the FTC Funeral Rule, has messed with “death,” and via the IRS, “taxes.” This quote has survived 221 years but will not survive another 100.

The problem is most funeral home owners do not take the time to understand tax law. They rely on accountants for that. Plus, business owners often do not talk to the accountant until after the tax year is over. But there’s very little you can do to plan to reduce taxation after year-end.

“Anyone may arrange his affairs so that his taxes shall be as low as possible; he is not bound to choose that pattern which best pays the Treasury. There is not even a patriotic duty to increase one’s taxes. Over and over again, the courts have said that there is nothing sinister in so arranging affairs as to keep taxes as low as possible. Everyone does it, rich and poor alike, and all do right, fornobody owes any public duty to pay more than the law demands.”
– Judge Learned Hand, U.S. Court of Appeals, 1939

The message Judge Hand was trying to convey is that tax planning is a reasonable thing to do. The Internal Revenue Code is published for all to read and for all to apply their business and personal income. You can and should do this, as taxes are an exact computation. The question I must ask you, dear reader, is, “Why don’t you take the time to plan?”

The error business owners make is assuming their tax filer is knowledgeable about tax planning. They are only knowledgeable in filling out the forms; they are not auditing your tax return nor are they attesting to the accuracy of your deductions. They merely file what you give them.

There is one option for tax planning that is verboten, and that’s cheating. In fact, the line on which you sign your personal and business tax return includes the following statement: “Under penalties of perjury, I declare that I have examined this return and accompanying schedules and statements, and to the best of my knowledge and belief, they are true, correct and complete.” Why commit perjury? Why leave yourself open for review for three years in most cases, seven years in some cases and forever in the most egregious cases?

I remember being an expert witness in a funeral home valuation case in the 1990s that was part of a divorce hearing. The firm was an Italian Catholic business doing 300 cases. Now, reader, stop and guess how much revenue that business must have had? The tax returns the husband filed (I was working on behalf of the wife) listed $750,000! (I would have expected $2.5 million to $3 million.) The husband’s tax return also showed his cost of caskets to be $600,000! Essentially, he was proclaiming that he was making no money.

When I convinced the judge of this egregious tax fraud, the judge looked over at the husband and asked, “How do you explain this, sir?” and he replied sheepishly, “Creative accounting!” Do not use “creative accounting”! Any tax filing with more than a 25% restatement of taxable income has an unlimited statute of limitations.

With that said, let me introduce you to the issues of tax planning, a simple maze of four decisions for your business return. I will then summarize the tax decisions and provide recommendations as if you were starting a business today.

On the surface, you might think, “I want to be taxed at 21% rather than 24% or more!” Unfortunately, that’s a mistake. The income earned would be taxed at 21% now, but at some time in the future, you will take the earnings out of the business account. At that later date, when you take money out of your corporation, you will be taxed again. In fact, if you invest the money in a C corporation that appreciates and then sell those assets owned by the C corporation, you will be taxed on the gain at the corporate level and a second time when you take the money out of the corporation.

A one-tax solution is a S corporation or a Limited Liability Company (LLC). This has your income from the business taxed once and only once, at the personal tax bracket. It avoids a double tax when you sell your business. It’s clean and efficient.

There are many philosophical debates about time and reality, and the tax world has its own. The question is, “When is income income?” Well, that depends on whether you are a taxpayer on a cash basis or an accrual basis.

Individuals don’t have a choice. They are taxed on the cash basis.

Frankly, I like both methods but for different purposes. I like paying taxes on the cash basis as an individual and as a business owner. However, for management purposes, I like the accrual basis, which lets me see how my business is operating in real time. It used to be that funeral homes could not file their taxes on the cash basis as they were dealers in inventory. That changed about 15 years ago.

My preference for my clients is accrual basis for management reports and cash basis for taxes. This allows me to not pay tax on the accounts receivable of the business, which in funeral service could be 10% or more of annual revenue. Before the computer, you could not feasibly flip back and forth between cash and accrual, but those were the bad old days.

Capital assets are significant pieces of tangible property used in a business that have a useful life expectancy of more than a year, such as automobiles and buildings. Autos, furniture and fixtures are depreciated and actually decline in value. Buildings are depreciated as a tax incentive, but in reality, they tend to appreciate. You don’t pay a tax on the appreciation until you sell the building.

Therefore, I like to own buildings in a separate entity and receive rents as pass-through income. I like this other entity to be an LLC or Sub S corporation so the growth on the asset will only be taxed once at the personal level. The depreciation, interest expense and rents will make a difference if you do it properly.

What is the difference between a taxidermist and a tax collector? The taxidermist takes only your skin.
– Mark Twain

Most taxpayers don’t understand that salary is only deductible to the degree that it is usual and customary. Excessive salary may not be deductible. Excessive salary today is just bad planning. The change in the tax law in 2018 created a new type of income – pass-through income. While pass-through income has always been around, now, if a business meets a few mathematical tests, it is possible that up to 20% of the pass-through income is exempt from taxation! This deduction is the qualified business income deduction. If a business owner takes $100,000 as a year-end bonus, then all of that is subject to tax. If a business owner takes $100,000 as a pass-through distribution, then it may be only $80,000 that is taxed.

There are very few tax savings better than a qualified retirement plan, which is funded by a company and grows tax-free for the employee until he or she retires. There are as many ways to plan a qualified retirement plan as there are chili recipes, and business owners should independently study their options since some provide more leverage to the owner’s account than others.

Yes, the tax law is complicated, and just because someone is called an accountant doesn’t mean he or she knows tax law. Knowing the law of taxing individuals is different from knowing the tax law of businesses.

“The hardest thing in the world to understand is the income tax.”
– Albert Einstein

Yes, our income tax rates are high, but we are not the highest taxed nation. So, plan ahead and save yourself hundreds of thousands of dollars over your working lifetime. If you object, move to any country with a lower tax rate, but realize that the commute will be difficult!

Financial/tax advice contained in this article is for informational purposes only and may or may not apply to your individual position. Readers are strongly encouraged to seek the counsel of qualified advisers before undertaking any action based on this information.