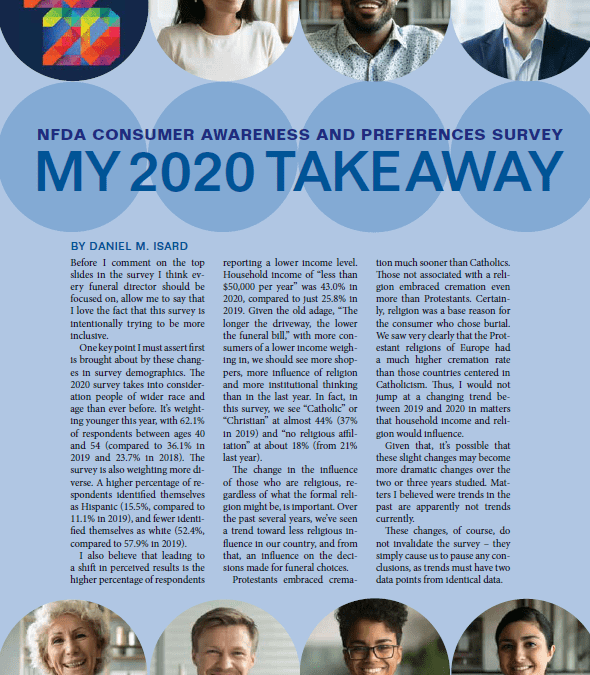 Before I comment on the top slides in the survey I think every funeral director should be focused on, allow me to say that I love the fact that this survey is intentionally trying to be more inclusive.

I also believe that leading to a shift in perceived results is the higher percentage of respondents reporting a lower income level. Household income of “less than $50,000 per year” was 43.0% in 2020, compared to just 25.8% in 2019. Given the old adage, “The longer the driveway, the lower the funeral bill,” with more consumers of a lower income weighing in, we should see more shoppers, more influence of religion and more institutional thinking than in the last year. In fact, in this survey, we see “Catholic” or “Christian” at almost 44% (37% in 2019) and “no religious affiliation” at about 18% (from 21% last year).

The change in the influence of those who are religious, regardless of what the formal religion might be, is important. Over the past several years, we’ve seen a trend toward less religious influence in our country, and from that, an influence on the decisions made for funeral choices.

Protestants embraced cremation much sooner than Catholics. Those not associated with a religion embraced cremation even more than Protestants. Certainly, religion was a base reason for the consumer who chose burial. We saw very clearly that the Protestant religions of Europe had a much higher cremation rate than those countries centered in Catholicism. Thus, I would not jump at a changing trend between 2019 and 2020 in matters that household income and religion would influence.

Given that, it’s possible that these slight changes may become more dramatic changes over the two or three years studied. Matters I believed were trends in the past are apparently not trends currently. These changes, of course, do not invalidate the survey – they simply cause us to pause any conclusions, as trends must have two data points from identical data.

POINTS TO PAY ATTENTION TO

Shopping: In the 2020 survey, we see that more people did shop for a funeral home. This shouldn’t surprise anyone in a younger age group and with lower household income. However, the degree of the change in results from 2017 and 2019 to the 2020 survey is significant. Today, far fewer folks are “not shopping.” Most 2020 respondents shopped either one or two funeral homes. The main reason for shopping continued to be to compare prices.

This tells me that most funeral homes are not doing a good-enough job of explaining their strong suits to consumers. When all funeral homes are deemed equal, price will always be a qualifying factor. How consumers obtained price information was primarily in person, with the secondary choice being via telephone. Clearly, we need to educate families on how to choose a funeral home. We must prepare more people in the business to talk to consumers about pricing and choices. Choosing a funeral home solely on price is like choosing a sushi restaurant based on price! Most respondents who price-shopped found it relatively easy. In the past, price shopping, or “transparency,” was an obstacle unique to the funeral profession.

Price: Price shopping is one thing, but choosing a funeral home because of its perceived affordable price is quite another. In this survey, the number of people choosing a funeral home because of its affordable price was almost 4 out of 10. That’s up almost 100% over last year and almost 250% over 2018! Is this a result of the younger age or lower household income demographics? Or of directors not demonstrating their strengths? I don’t know.

An unrelated question dealt with price information. Most respondents said they would seek price information from a local firm, but almost 26% would ask hospice and almost 19% would use Google. Does everyone have a hospice relationship and a Google campaign?

The Obituary: “Who wrote your loved one’s obituary?” was a new question added for 2020. In 60% of cases, the family perceived writing it. What is astonishing is that about 11% said an obituary was not published at all. This goes hand in hand with the slow death of newspaper obituary publishing.

But just because someone is not publishing an obituary in a newspaper doesn’t mean an obituary should not be created. They are more popular than ever on social media and should be published on the funeral home’s website.

The Internet: Funeral home websites are still the most popular method for seeking information on planning a funeral or memorial service, said almost two-thirds of this year’s surveyed group. But I have to tell you from my own reviews of hundreds of funeral home websites every year that I don’t know what this group was talking about! I do not see very many funeral home websites that actually help consumers understand what their options are and how to plan a funeral.

One of the dark shadows funeral homes should be aware of pertaining to this question is that the usage of national consumer websites dedicated to funerals have gone from 8.9% to 12% of respondents in 2020, an almost 33% increase. Hospice went from almost 4.7% to 6.7%, close to a 50% increase.

The Body: The body at a funeral or memorial is a huge matter. Howard Raether, longtime NFDA executive director, used to say in the 1970s, “When the body is not at the funeral, we will be out of business!”

In the past, somewhere between 23% and 30% of consumers thought it was very important that the body be present. This year, it’s almost 40%. However, I tend to think that is more because of the younger age of the respondents, who have never made an arrangement, and the more religious.

If this is a true trend, then we must capitalize on it. If this is an aberration, we still need to capitalize on it. Begin educating families, as opposed to falling into the perilous group of arrangers who are mind readers and claim, “I know what you mean when you say ‘direct cremation.’ ”

Social Media Use: Social media is a great aid because it costs absolutely nothing to use. Using it properly, however, can have a cost. That cost might be modest in the big picture. Did you know that more than 50% of respondents said they checked Facebook at least daily? That’s up almost 25% from the previous year, when the numbers were about 42% of respondents. Still, almost 2 out of 3 respondents said they had never seen or visited a funeral home Facebook page.

Maybe it’s due to the age of the respondents this year or maybe we’re doing a better job of reaching out to more of the community. In 2019 and 2018, more than 80% had never seen a funeral home Facebook page. Of those who did check out a funeral home’s Facebook page this year, almost 15% reported that they had used the services of a funeral home they found on Facebook, which is up almost 500% over the previous two years.

POINTS TO WATCH AND ADJUST TO NOW

Green Funerals: Questions have been asked about green funerals for the past several years, and these numbers continue to grow in spite of the fact that very few funeral directors offer them. Seemingly, 15% of respondents thought a green funeral would be less expensive, but in reality, it’s not. Did a Prius cost less than a Corolla?

Non-Professional Funeral Leaders: Celebrants continue to increase in popularity, although the group that doesn’t know what one is has stayed fairly constant.

Body donation: To me, this is the most troubling point of the whole survey. Somewhere north of 20% of respondents continue to feel it is a benefit to donate their body to medical research. But what consumers probably don’t know is that these body donation companies are getting a free pass on how they operate. This is not the same as leaving your dead body to a medical college to be utilized as a teaching aid.

Cremation: Cremation is now an accepted disposition choice by most people for themselves. However, almost 26% of this year’s survey group felt they wanted to have a funeral service and then a cremation.