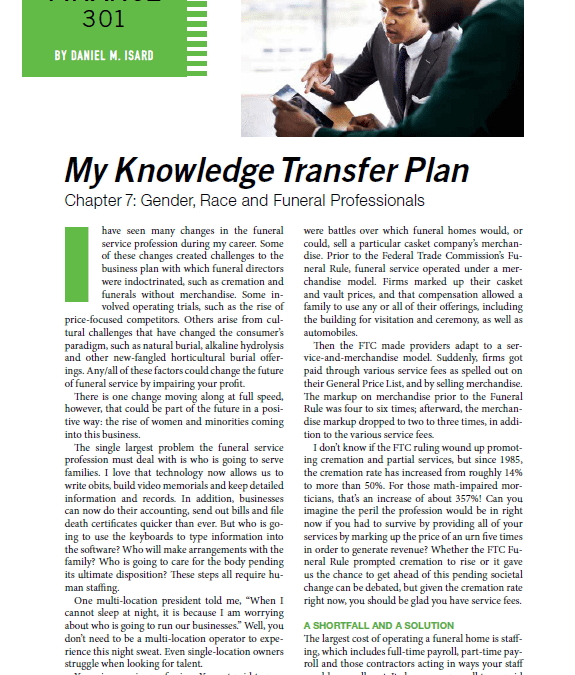 I have seen many changes in the funeral service profession during my career. Some of these changes created challenges to the business plan with which funeral directors were indoctrinated, such as cremation and funerals without merchandise. Some involved operating trials, such as the rise of price-focused competitors. Others arise from cultural challenges that have changed the consumer’s paradigm, such as natural burial, alkaline hydrolysis and other new-fangled horticultural burial offerings. Any/all of these factors could change the future of funeral service by impairing your profit.

There is one change moving along at full speed, however, that could be part of the future in a positive way: the rise of women and minorities coming into this business.

The single largest problem the funeral service profession must deal with is who is going to serve families. I love that technology now allows us to write obits, build video memorials and keep detailed information and records. In addition, businesses can now do their accounting, send out bills and file death certificates quicker than ever. But who is going to use the keyboards to type information into the software? Who will make arrangements with the family? Who is going to care for the body pending its ultimate disposition? These steps all require human staffing.

One multi-location president told me, “When I cannot sleep at night, it is because I am worrying about who is going to run our businesses.” Well, you don’t need to be a multi-location operator to experience this night sweat. Even single-location owners struggle when looking for talent.

Yours is a service profession. You get paid to perform your service for a family. In the 1980s, there were battles over which funeral homes would, or could, sell a particular casket company’s merchandise. Prior to the Federal Trade Commission’s Funeral Rule, funeral service operated under a merchandise model. Firms marked up their casket and vault prices, and that compensation allowed a family to use any or all of their offerings, including the building for visitation and ceremony, as well as automobiles.

I don’t know if the FTC ruling wound up promoting cremation and partial services, but since 1985, the cremation rate has increased from roughly 14% to more than 50%. For those math-impaired morticians, that’s an increase of about 357%! Can you imagine the peril the profession would be in right now if you had to survive by providing all of your services by marking up the price of an urn five times in order to generate revenue? Whether the FTC Funeral Rule prompted cremation to rise or it gave us the chance to get ahead of this pending societal change can be debated, but given the cremation rate right now, you should be glad you have service fees.

A Shortfall and a Solution

The largest cost of operating a funeral home is staffing, which includes full-time payroll, part-time payroll and those contractors acting in ways your staff would normally act. It also covers payroll taxes paid by the employer and any benefits offered to your staff, such as health insurance, vacation pay and other perquisites. This cost, relative to a firm’s revenue, could be anywhere from 26% to 32% in a well-run funeral business, and more in some that are not as focused on business operations.

How can this shortfall occur? Assume that the average career is 25 years long due to death, burnout and attrition. This means that in order to stay even, the profession needs to add 1,000 funeral directors a year. But actually, the number is higher than this because many people with a funeral service school degree find they don’t like the profession after working in it. That tells me the industry needs about 1,500 graduates each year to break even.

So, is there a solution? Yes, and it’s unfolding right before our eyes. The May 5, 2022, issue of Memorial Business Journal reported the 2021 numbers from the American Board of Funeral Service Education (ABFSE). The good news is that the total number of new enrollees is up. According to ABFSE, of the 3,395 new enrollees, 2,447 or 72% of all new funeral service school sign-ups are female! This rise in women entering funeral service is not a one-year thing.

In 1983, the late David Baue (yes, Lisa’s dad) helped found the National Foundation of Funeral Service’s Women in Funeral Service Seminar, the predecessor program to today’s NFDA Professional Women’s Conference. He realized that women communicated more easily with other women and that having this study group would help the small number of females in funeral service build relationships that would benefit the profession.

Women entering the profession in a big way provides a great solution not only for your staffing needs but also for consumers. You don’t have to be a fan of the book Men Are From Mars, Women Are From Venus to understand that women are typically better listeners, better at providing empathy and able to physically touch another without being a threat to the receiver. In studies I have done with firms that employ both male and female arrangers, I have seen women with higher average-revenue-per-call arrangements. I have also seen women be better preneed sellers for funeral and cemetery arrangements.

The Future Will Look Diverse

Based on the current path to licensure, there are several steps individuals must take to move from new enrollee to funeral service school graduate to licensed professional:

Step 1 New enrollee joins one of the many funeral service colleges.

Step 2 New enrollee matriculates from the funeral service college. Between Step 1 and Step 2, there’s a chance the student will change his or her mind. This is the first chance for attrition, which means someone has realized they don’t want to remain in the business. Almost 940 students left the path toward a funeral career in 2021. Of course, these people were made up of some of 2021’s new enrollees and others presumably from previous classes. This usually accounts for about a third of new enrollees, using rounded numbers.

Step 4 The individual passes board exam and becomes a licensed professional. This is where the funeral service schools and ABFSE lose track of students’ careers, unfortunately, as this is the next opportunity for attrition. We tend to see the second-highest number of attritions at this point, but it’s this group that hurts the overall numbers the most.

In an ideal world, you want employees with five or more years of experience. Given the number of female graduates replacing existing licensees who are retiring, dying or leaving of their own accord, I predict that more than 50% of all funeral directors will be women by the year 2035.

But the profession faces yet another issue. I don’t see funeral directors turning away families, but many families elect not to use a particular funeral home because of ethnicity and/or religious preference. Families want a funeral home that knows their specific culture and provides comfort to them.

The chart on page 25 shows that roughly 60% of enrollees are white, yet just under 58% of the United States population at present is white. Thus, we will also see greater racial blending of funeral directors within funeral homes in the future, so that even historically white funeral homes will have minority and/or mixed-race funeral arrangers.

This will pose a challenge for some who are not prepared for a funeral business that employs a diverse workforce, but this is all part of its evolution. We don’t see the line in the sand between Catholic and Protestant funeral homes like we did four decades ago, for instance. Likewise, we do not see the predominance of single-race babies born in the United States today as the number of multi-race babies has tripled during that same period.

The funeral home of the future will use neither religion nor race to identify its service community, nor will it be limited by gender or race for its employees. Diversity is the direction for the future in terms of marketing and employment.