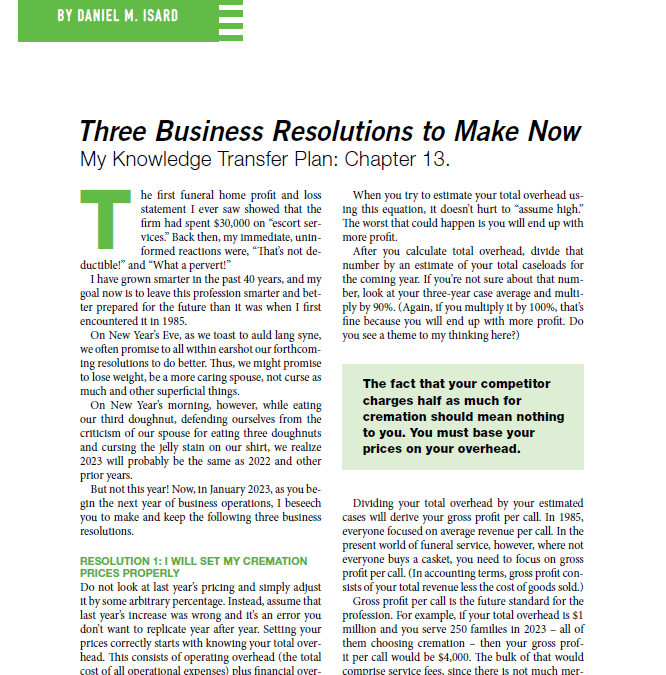 The first funeral home profit and loss statement I ever saw showed that the firm had spent $30,000 on “escort services.” Back then, my immediate, uninformed reactions were, “That’s not deductible!” and “What a pervert!”

I have grown smarter in the past 40 years, and my goal now is to leave this profession smarter and better prepared for the future than it was when I first encountered it in 1985.

On New Year’s Eve, as we toast to auld lang syne, we often promise to all within earshot our forthcoming resolutions to do better. Thus, we might promise to lose weight, be a more caring spouse, not curse as much and other superficial things.

On New Year’s morning, however, while eating our third doughnut, defending ourselves from the criticism of our spouse for eating three doughnuts and cursing the jelly stain on our shirt, we realize 2023 will probably be the same as 2022 and other prior years.

But not this year! Now, in January 2023, as you begin the next year of business operations, I beseech you to make and keep the following three business resolutions.

Resolution 1: I will set my cremation prices properly

Do not look at last year’s pricing and simply adjust it by some arbitrary percentage. Instead, assume that last year’s increase was wrong and it’s an error you don’t want to replicate year after year. Setting your prices correctly starts with knowing your total overhead. This consists of operating overhead (the total cost of all operational expenses) plus financial overhead (the sum cost of principal and interest on your debt payments, business income taxes, capital reinvested into the business assets, any increase in cash reserves over the previous year and profit).

When you try to estimate your total overhead using this equation, it doesn’t hurt to “assume high.” The worst that could happen is you will end up with more profit.

After you calculate total overhead, divide that number by an estimate of your total caseloads for the coming year. If you’re not sure about that number, look at your three-year case average and multiply by 90%. (Again, if you multiply it by 100%, that’s fine because you will end up with more profit. Do you see a theme to my thinking here?)

Gross profit per call is the future standard for the profession. For example, if your total overhead is $1 million and you serve 250 families in 2023 – all of them choosing cremation – then your gross profit per call would be $4,000. The bulk of that would comprise service fees, since there is not much merchandise profit in selling urns.

The fact that your competitor charges half as much for cremation should mean nothing to you. You must base your prices on your overhead. Your competitor does not have your overhead. Maybe they don’t care if they go bankrupt. Warren Buffet put it particularly well when he said, “Only when the tide goes out do you discover who’s been swimming naked.”

You cannot continue to tax burial consumers to pay for the overhead you are afraid to collect from cremation consumers.

Resolution 2: I will recruit people to join the profession

I know you are busy, but unless you do something now, you will be even busier in the future. Your profession is losing about 500 licensees a year due to death, attrition and burnout. This is the net between hiring and licensing.

What’s more, the average funeral home call volume has increased from roughly 85 calls in 1985 to almost 140 calls today. This has nothing to do with your good marketing efforts; it’s because the population has grown from about 240 million in 1985 to more than 333 million now.

Meanwhile, the number of funeral home locations has decreased by at least 3,000 rooftops – from about 22,000 to 19,000 – over the past 30 years. This is the root of your increased stress. Unfortunately, this number will only continue to grow. Bottom line: Funeral homes must increase staffing.

I will spare you “Isard’s Long Diatribe #2” (this time) about the need to change current education and licensing requirements, as well as other factors, in order to bring greater numbers of people into funeral service. Suffice it to say that you will be busier personally if you do not bring more newcomers to your profession.

You are a role model and known by more people in your community than you realize. Do not be timid about the work you do. Share your stories. In this unique, post-COVID employment world, people are looking for jobs that can make them feel good about their work. You know that feeling of appreciation! There is no other job in which a family hugs their advisor the way they often hug a funeral director graveside. As you know, many of the families you serve go from strangers to lifelong friends in just a few short days.

In 2023, you must start a personal recruiting effort to bring people into the profession. NFDA and others have been recruiting military veterans in the United States and Canada to consider funeral service as a second career. You should likewise reach out to anyone leaving the military and explain to them your ministry. The two careers have much in common. (See journeytoserve.com for more information.)

Recruiting is not a part-time job – it’s full time! And it doesn’t matter if you need help at this moment or not. People are your inventory, and you never know who might be thinking about a career change. Some people need to uproot their own life, and maybe that of their entire family, to find the right job. Imagine how comforting it would be for someone seeking a good-paying job to remain in your town or neighborhood.

Resolution 3: I will get a life

There are only a few professions in which practitioners are publicly referred to using their occupation as part of their name. For example: Pastor Smith is a preacher, Dr. Smith is a physician, Gen. Smith is a military leader.

Unfortunately, too many of you are known by your profession, i.e., funeral director Smith, or you at least hear those words when you’re introduced, e.g., “Meet Tom Smith, our local undertaker.” This happens because many funeral directors have no life outside of work. They still take calls after hours and go grocery shopping in a suit and tie. Later, when they get older and reach the point when they should transfer their business, they feel afraid to do so because their entire self-identity is connected to their work.

In 2023, I urge you to find a passion outside of your career. It could be anything. What would you do as a daily occupation if you won the lottery? It doesn’t have to be for money – that’s what the winning lottery ticket provides. I once asked a client this question, and he replied, “I would be a funeral director, but now I could give funerals away!”

In life, there are only three options: die before retirement, become disabled before retirement or die after retirement. The good news is that almost 80% of all people will experience the third option. Once I retire, I aspire to join the PGA Tour Champions as a senior golfer. If I can get another 19 strokes off my handicap, I’m going to hit the road in search of a trophy. You, too, must figure out what you would like to do for a second career.

In reality, funeral service is a lay ministerial position, and like any good minister, you help families at a specific time in a particular rite/ritual. While you haven’t taken a vow of poverty, you have chosen a life devoted to helping others. Upon retirement, remember that you can still volunteer for causes if you wish to continue this benevolence.

Anyone can make a resolution. For example, I resolve never to tell anyone about the first profit and loss statement I saw at a funeral home. (Whoops, busted!) But making a resolution is different from keeping one. Please, make these three resolutions and work every day to keep them!