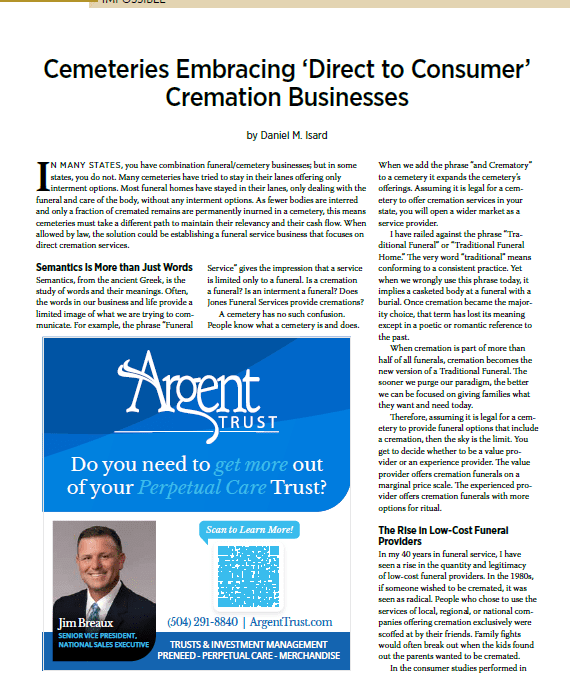 In many states, you have combination funeral/cemetery businesses; but in some states, you do not. Many cemeteries have tried to stay in their lanes offering only interment options. Most funeral homes have stayed in their lanes, only dealing with the funeral and care of the body, without any interment options. As fewer bodies are interred and only a fraction of cremated remains are permanently inurned in a cemetery, this means cemeteries must take a different path to maintain their relevancy and their cash flow. When allowed by law, the solution could be establishing a funeral service business that focuses on direct cremation services.

Semantics Is More than Just Words

Semantics, from the ancient Greek, is the study of words and their meanings. Often, the words in our business and life provide a limited image of what we are trying to communicate. For example, the phrase “Funeral Service” gives the impression that a service is limited only to a funeral. Is a cremation a funeral? Is an interment a funeral? Does Jones Funeral Services provide cremations?

A cemetery has no such confusion. People know what a cemetery is and does. When we add the phrase “and Crematory” to a cemetery it expands the cemetery’s offerings. Assuming it is legal for a cemetery to offer cremation services in your state, you will open a wider market as a service provider.

I have railed against the phrase “Traditional Funeral” or “Traditional Funeral Home.” The very word “traditional” means conforming to a consistent practice. Yet when we wrongly use this phrase today, it implies a casketed body at a funeral with a burial. Once cremation became the majority choice, that term has lost its meaning except in a poetic or romantic reference to the past.

When cremation is part of more than half of all funerals, cremation becomes the new version of a Traditional Funeral. The sooner we purge our paradigm, the better we can be focused on giving families what they want and need today.

The Rise in Low-Cost Funeral Providers

In my 40 years in funeral service, I have seen a rise in the quantity and legitimacy of low-cost funeral providers. In the 1980s, if someone wished to be cremated, it was seen as radical. People who chose to use the services of local, regional, or national companies offering cremation exclusively were scoffed at by their friends. Family fights would often break out when the kids found out the parents wanted to be cremated.

In the consumer studies performed in the early 1990s, known as The Wirthlin Report, consumers chose a funeral home based on price less than 5 percent of the time. Since then, price-driven consumers have become mainstream. In recent surveys by my company and national surveys, price is now the basis for about 15 percent to 20 percent of all consumer choices.

Those seeking cremation are not radicals. Why? There are maybe five good reasons for this push.

If cremation is the choice of more than 50 percent of all consumers today, how do you differentiate between cremation services? We do not stress the difference between whether we own or use a third-party crematory. Many funeral homes do not have cremation in their name or logo, so consumers may not think you provide anything other than a “funeral,” which in their mind includes a casket and an embalmed body.

In the 1980s, whether you were in a small town or a large town and served nearby neighborhoods, you knew many of the families personally. You knew them from church or civic groups. Presently, Rotary or other civic groups have very little appeal. Churches have less of a role in our society, according to the Pew Foundation surveys. So, we choose a funeral home differently than we did just two generations ago.

In 1980, our population was 226 million and our mortality rate was about 8.0 deaths per thousand. That resulted in about 1.8 million deaths. We know that our value-focused funeral consumers were about 5 percent, resulting in about 90,000 price-focused consumers. In 2019, our population was about 330 million and our mortality rate increased to about 8.6 deaths per thousand. This accounted for about 2.8 million deaths.

If our value-focused consumers are now up to about 20 percent, that accounts for about 560,000 calls.

Cemeteries have lost interment opportunities as bodies are cremated and not buried. The entire aligned profession has lost casket sales, vault/grave liner sales, marker sales, and more, each time a person that heretofore would have been buried chooses cremation. Only about 10 percent to 20 percent of all cremated bodies are permanently inurned at a cemetery. Cremation is costing the cemeterian just as much revenue as the funeral home.

Just as the problem funeral homes are facing, cemeteries have a large, fixed cost of operations. If your revenue is being impaired, and costs of operation are fixed, then profit is the only thing that can change. Therefore, you need to find other sources of revenue. This solution of having a direct-to- consumer cremation business can help you recapture lost revenue and not tax your fixed cost of operations.

So, What Is the Answer?

Cremation is the answer to the problem with cremation! You can market virtually. You have a name that is well-known in the community for decades or longer. This is an advantage. You can market on equal footing. You can also ask families the questions about inurnment options that the other alternative providers are not concerned with.

With this in mind, should a cemetery find a way to add a retort and market cremation- focused funerals direct to consumers? Yes, if the law allows. It may be a way to add revenue and profit to your cemetery, through the very route that has been impairing your revenue.

What if the law does not allow, as it does not in some states? I recommend that you consider finding how your association can help change the law. Laws are created by the people and they are changed by the people.

Many laws governing funerals are based on biological protections, but some are driven by business points. We have gone from not having OSHA-established prep rooms to having OSHA-governed prep rooms. We will be embracing the future when we start making cremation more available.