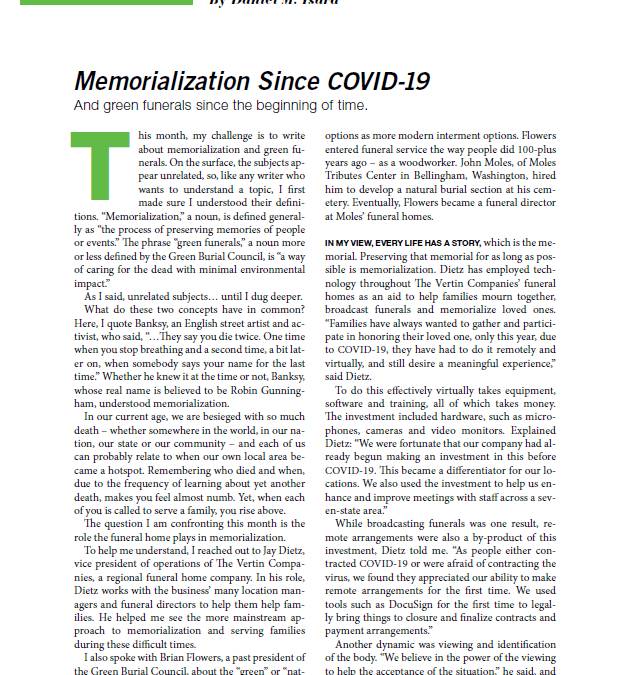 And green funerals since the beginning of time.

This month, my challenge is to write about memorialization and green funerals. On the surface, the subjects appear unrelated, so, like any writer who wants to understand a topic, I first made sure I understood their definitions. “Memorialization,” a noun, is defined generally as “the process of preserving memories of people or events.” The phrase “green funerals,” a noun more or less defined by the Green Burial Council, is “a way of caring for the dead with minimal environmental impact.”

As I said, unrelated subjects… until I dug deeper.

What do these two concepts have in common? Here, I quote Banksy, an English street artist and activist, who said, “…They say you die twice. One time when you stop breathing and a second time, a bit later on, when somebody says your name for the last time.” Whether he knew it at the time or not, Banksy, whose real name is believed to be Robin Gunningham, understood memorialization.

In our current age, we are besieged with so much death – whether somewhere in the world, in our nation, our state or our community – and each of us can probably relate to when our own local area became a hotspot. Remembering who died and when, due to the frequency of learning about yet another death, makes you feel almost numb. Yet, when each of you is called to serve a family, you rise above.

The question I am confronting this month is the role the funeral home plays in memorialization.

To help me understand, I reached out to Jay Dietz, vice president of operations of The Vertin Companies, a regional funeral home company. In his role, Dietz works with the business’ many location managers and funeral directors to help them help families. He helped me see the more mainstream approach to memorialization and serving families during these difficult times.

I also spoke with Brian Flowers, a past president of the Green Burial Council, about the “green” or “natural” burial movement and learned there are many ways to memorialize via natural burial choices that can prove just as cathartic and provide just as many options as more modern interment options. Flowers entered funeral service the way people did 100-plus years ago – as a woodworker. John Moles, of Moles Tributes Center in Bellingham, Washington, hired him to develop a natural burial section at his cemetery. Eventually, Flowers became a funeral director at Moles’ funeral homes.

In my view, every life has a story, which is the memorial. Preserving that memorial for as long as possible is memorialization. Dietz has employed technology throughout The Vertin Companies’ funeral homes as an aid to help families mourn together, broadcast funerals and memorialize loved ones. “Families have always wanted to gather and participate in honoring their loved one, only this year, due to COVID-19, they have had to do it remotely and virtually, and still desire a meaningful experience,” said Dietz.

To do this effectively virtually takes equipment, software and training, all of which takes money. The investment included hardware, such as microphones, cameras and video monitors. Explained ­Dietz: “We were fortunate that our company had already begun making an investment in this before COVID-19. This became a differentiator for our locations. We also used the investment to help us enhance and improve meetings with staff across a seven-state area.”

Another dynamic was viewing and identification of the body. “We believe in the power of the viewing to help the acceptance of the situation,” he said, and “we were able to do remote viewings for ­families. We didn’t do this widely, but families were open to doing new things never done before due to COVID-19.”

The Vertin Companies operates in markets of all sizes, so I was curious about how the acceptance of technology in the funeral and memorial process varied based on the size of the town. While unwilling to generalize, Dietz did acknowledge: “Larger markets were the first to see a spike in COVID-19 numbers. These communities, because of this outbreak, became the most accepting to the restrictions and regulations placed upon them as they were trying to memorialize their loved ones.”

Many funeral homes have tried to secure a deferred funeral gathering, but Vertin did not. “We purposefully pushed against that. We [do] not believe grief is something you could simply hit a ‘pause button’ on,” Dietz explained. “We encouraged families not to delay, and technology gave us the ability to bring that service to a broader audience right away.”

Brian Flowers has taken a different path to serving families through the green or natural funeral and interment approach. He noted that most “green” consumers “identify a funeral home or cemetery, having educated themselves. They are smart, savvy and oftentimes jaded. They might have encountered a provider that claims to be green. Some providers use green as a disposable marketing tactic.”

“Green” involves more than just not using formaldehyde or a vault, said Flowers. “[It’s] also being used for ecological restoration and landscape-level conservation.” This type of memorialization can include plantings of indigenous species as part of a customized burial site and memorial. As an example, he noted that for each burial they do at their site, three native plant species are planted on or near the burial site. “Memorial plantings become part of the site, so planting can take place during the seasonal window,” added Flowers. “We work with a family for anywhere from 1 to 24 months after the interment to design the planting, which is interesting, as usually some healing has occurred, and we are coming back and putting new life in the ground.”

Green funerals also take into consideration their carbon footprint, and Flowers explained how this impacts grave markers. “Probably 80% of families that have chosen a green funeral chose a permanent memorialization with an engraved stone,” he shared. “That speaks to society’s need to memorialize our deceased.”

The stone, however, is not what you’d expect. Explained Flowers: “We are in a wild and woolly natural landscape. Those headstones needed to look different, so they are kept in their raw format as boulders and slabs, which are actually quite beautiful. We chose to go with native Washington stones, which reduced our carbon footprint compared to granite quarried in Pakistan or China, or bronze that comes out of a foundry.”

A green funeral can prove very cathartic to mourners as well, said Flowers. “In the name of convenience, the mourning process has become very passive over the last 100 years. Green burial can invite family members into the process in some unique and meaningful ways.” As an example, he noted the opportunity for families to close the grave by hand and shared the story of a parent who poured his grief into sweat in near-zero temperatures to close the grave of his child, helping him begin his healing journey.

The natural burial movement offers just as many options for providing an active funeral and interment. In some ways, its low-tech offerings provide even greater symbolic meaning. Hand-created and -restored caissons leading mourners into a cemetery and to the place of interment provide a stirring visual image. The natural way of filling a grave, with mourners providing the labor, provides a catharsis that helps the body, mind and soul begin working through the pain of loss.

I urge you to pop some corn, settle back and watch the video of both interviews (see below for link). For Dietz, have a pen and paper for copious notes. For Flowers, kick off your shoes and let his melodious voice and choice of words tell a story about a time long ago – or what could be tomorrow.

I believe some of those who think “cremation is for me because it’s easy” would change their mind if they just listened to the green alternatives. Funerals are a biological necessity for the deceased, but gathering – whether in a building or in a field – is for the living. Scattering cremated remains is romantic but leaves no memorial. Death is not easy, but neither is the second death Banksy described.

To watch the video interview for this article, visit our YouTube Channel by clicking this link: https://www.youtube.com/watch?v=-asAwtsNKJ4